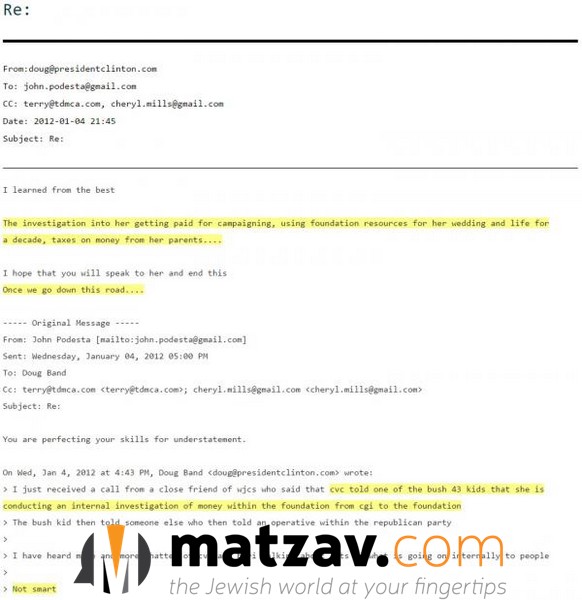 Former President Bill Clinton’s top aide wrote in 2012 that Chelsea Clinton used Clinton Foundation resources “for her wedding and life for a decade” and a top Foundation donor was responsible for “killing” unfavorable press coverage – all as an internal Foundation audit uncovered numerous conflicts of interest and “quid pro quo benefits,” according to emails released Sunday by WikiLeaks, FOX NEWS reports.

Doug Band, founder of global strategies company Teneo and Bill Clinton’s personal assistant since the 1990s, wrote the Jan. 4, 2012, email to future Hillary Clinton presidential campaign chair John Podesta and two other Clinton aides after receiving word that Chelsea had told “one of the [President] bush 43 kids” and others about “an internal investigation of money within the foundation.” Band wrote such chatter was “not smart.”

“The investigation into her getting paid for campaigning, using foundation resources for her wedding and life for a decade, taxes on money from her parents….,” Band wrote. “I hope that you will speak to her and end this[.] Once we go down this road….”

The FBI reportedly is looking into The Clinton Foundation, although the extent and focus of the investigation is unclear.  Read more at FOX NEWS.