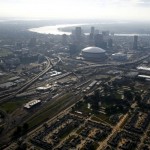 A new study published on Monday revealed that U.S. cities such as Miami and New Orleans will sink below rising seas regardless of efforts to curb global warming.

The study, published in Proceedings of the National Academy of Sciences, found that though some cities were beyond helping, extreme carbon cuts and moving to renewable energy could save millions of people who reside on at-risk regions in U.S. coastal areas.

According to the authors, the state of Florida has the most number of big cities at risk of sea level rise while California, Louisiana and New York are the next three most affected states.

New York City is also at risk of becoming unlivable by 2085, the study found. Read more at AFP.