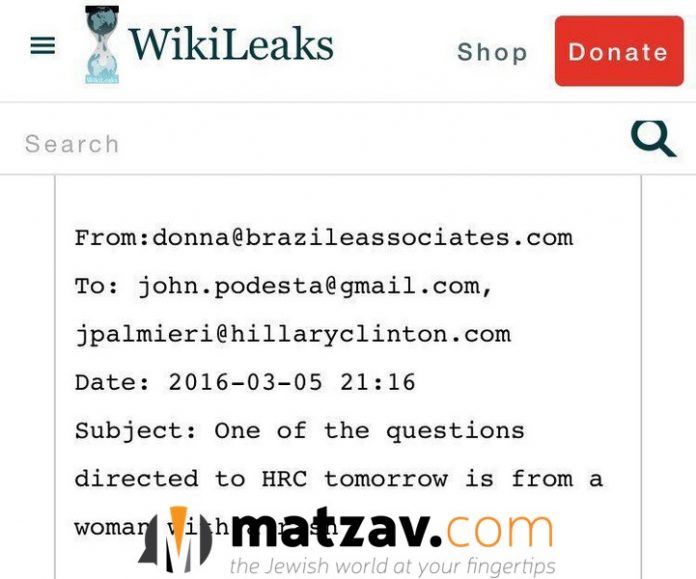 As Matzav.com previously reported, DNC head Donna Brazile denied that she leaked questions to Hillary Clinton in advance of a Democratic primary debate. The denials of Brazile, who was working at CNN at the time, were particularly bizarre in the face of a leaked email showing her giving Clinton’s team a question verbatim, technical analysis confirming she sent the email, and CNN’s Roland Martin refusing to comment on whether or not he gave her the question.

Well, reports the Weekly Standard, now we see another email in the latest Wikileaks dump showing Brazile leaking another question. The email is addressed to John Podesta and Jennifer Palmieri, Clinton’s director of communications, and dated March 6, the day before a debate:

Subject: One of the questions directed to HRC tomorrow is from a woman with a rash

Her family has lead poison and she will ask what, if anything, will Hillary do as president to help the ppl of Flint.

Folks, I did a service project today. It’s so tragic. And what’s worse, some homes have not been tested and it’s important to encourage seniors to also get tested.

The following day, a woman asked this question at the debate: “After my family, the city of Flint and the children in D.C. were poisoned by lead, will you make a personal promise to me right now that, as president, in your first 100 days in office, you will make it a requirement that all public water systems must remove all lead service lines throughout the entire United States, and notification made to the — the citizens that have said service lines.”

Will the media and the DNC hold Brazile accountable for this?