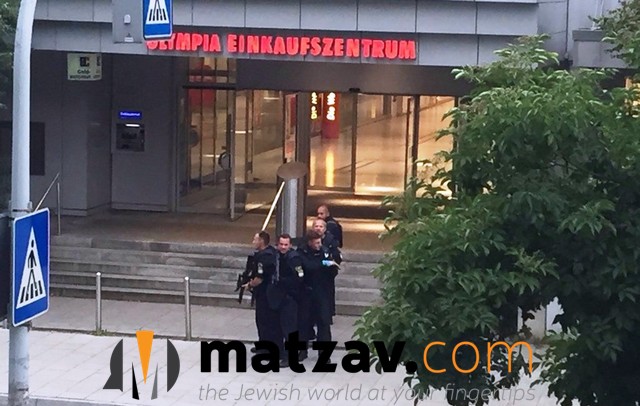 A shooting rampage in a busy shopping area of Munich caused multiple casualties Friday and sparked a manhunt for as many as three gunmen who fled the scene after carrying out an act of “suspected terrorism,” authorities said. A German broadcaster reported at least six people killed, as police put much of the southern German city on lockdown.

Officials did not immediately provide details on how the attacks unfolded or the full scope of the bloodshed at the Olympia shopping complex.

A manhunt was launched as helicopters fanned out over the city, and Munich’s transit system was shut down. Residents were asked to stay off the streets.

Munich police spokesman Peter Beck said that “according to the current state of investigation, there were three attackers armed with long guns. They’re still on the run.” He said there were “probably casualties, but we can’t give any details at this point.”

There was no immediate claim of responsibility for the shootings, but a high-ranking police official told The Washington Post that they appeared likely to be linked to terrorism.

A message posted online in Arabic, apparently from an Islamic State account, said: “Nowhere is safe for all of you. You people have opened the doors of hell by declaring war on us.”

An employee inside the mall, who would give only her first name, Sabiha, said she saw a gunman open fire outside her clothing store. The assailant – described as about 6-foot-1 and wearing a black shirt and “some kind of vest” – moved through the corridors before leaving the building, Sabiha told The Washington Post.

Sabiha said she saw at least two people killed and one injured.

“I was lucky because he shot toward the other directions, not mine,” she said, speaking from a hiding spot inside a storage room in the store.

A video clip posted on Twitter showed a gunman opening fire outside a McDonald’s near the shopping complex as people dashed for cover. The man appeared to fire on passersby with a handgun, seemingly at random.

A Munich police spokesman, Johannes Klinger, confirmed that several people were injured. “Whether there are any deaths, I don’t know,” he told The Post.

A police statement sent by Twitter urged people near the site to remain in their homes.

A similar announcement was issued by the U.S. Consulate in Munich, which reported “shots fired at multiple locations in Munich.” It advised U.S. citizens to “shelter in place pending police announcements that the situation is under control.”

German security forces have been on heightened alert since Monday, when a 17-year-old Afghan attacked passengers on a train in southern Germany. At least five people were injured.

The Islamic State group claimed responsibility for the train attack, but German authorities have said there is no evidence of direct links between the teen and the militant group.

The Munich mall is near the city’s Olympic Stadium, the centerpiece of the 1972 games that become known for tragedy when a Palestinian militant faction took Israeli athletes hostage and killed 11 of them.