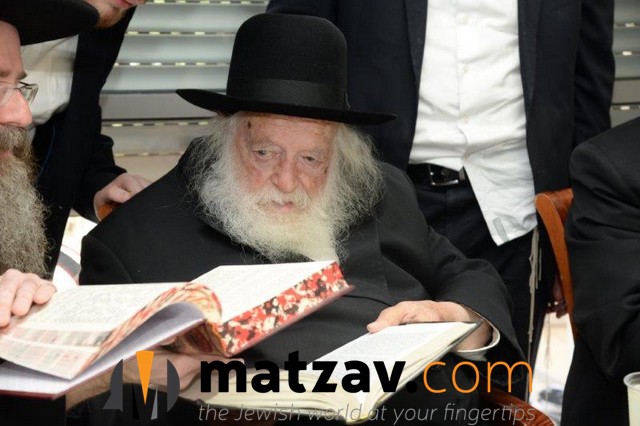 Rav Chaim Kanievsky generally answers all halachic questions sent to his home. Ten years ago, his son, Rav Yitzchok Shaul, noticed that thousands of teshuvos had accumulated and asked him whether it would be worthwhile to print them. Rav Chaim agreed on condition that his answers were carefully reviewed, for there were times when his answers were tailored for a particular person at a particular time.

Many volumes of teshuvos have already been printed under the title Da’as Noteh. Recently, a volume of hilchos tefillin was printed. It deals with the entire process of producing tefillin from parchment production to the shapes of letters. At the end of the sefer appear a number of long halacha letters Rav Chaim wrote over fifty years ago to various gedolei Torah.

A yungerman who is struggling to make ends meet recently wrote to Rav Chaim:

“I am a yungerman learning in kollel and have eight children. Lately, the financial situation at home has become very strained and I feel that if there was more parnossah I would learn much better. My question is, would it be considered hishtadlus to buy a United States lottery ticket for millions of dollars? True, baderech hateva there is no way I’d win, but I’ll daven a lot to Hashem and He Who knows peoples’ hearts will see that my intent is to learn more. Perhaps this is categorized as prayer for spiritual issues which is certainly accepted. What is your opinion?”

“Such a person is throwing his money away (lit. placing his money on a deer’s horn). The principle thing is to daven and if so, the effort is superfluous.”

Rav Chaim’s father, the Steipler Gaon, wrote that the chance of winning a lottery is so remote that it is not hishtadlus but aggravation.