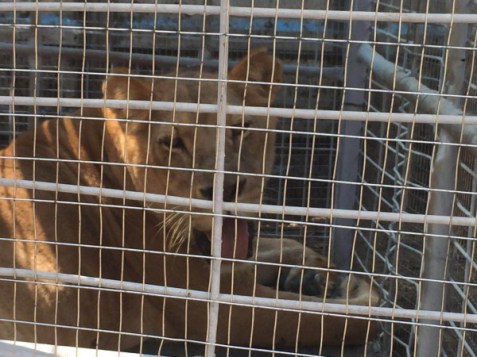 In a surreal scene at the border between Israel and Gaza, a 440-pound lioness was hoisted by a crane on Monday and sent through the border into Israel.

The eight-year-old lioness was forced to leave her home in Gaza’s Rafah Zoo in order to receive urgent medical treatment in the Palestinian Authority city of Tulkarem in Samaria.

The rescue mission was jointly run by the Israeli Coordinator of Government Activities in the Territories (COGAT) and the Hamas-run Ministry of Agriculture in Gaza. It was the latest in a string of Israeli-Hamas collaborations to rescue Gaza’s ailing lions.

Another lion was rescued from the Rafah Zoo last month, also passing through the Erez Crossing en route to Tulkarem, in a collaborative mission that COGAT dubbed “Operation Peace.” In the last year and a half, four other lions and two cubs have been evacuated from Gaza through Israel.

Many animals in Gaza zoos suffer from severe malnutrition and inadequate living conditions. Four Paws, an international aid organization devoted to animal welfare, has conducted several emergency missions to Gazan zoos — in Rafah, in Al Bisan, and in Khan Younis.

“There are now only 21 animals left in Al Bisan Zoo in northern Gaza,” the group’s website reported in February. “The others have died due to starvation.”