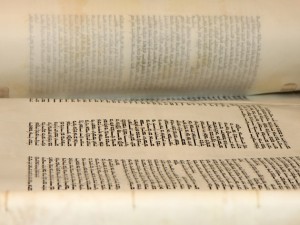 The posuk in Bereishis states, “Vayhi erev…Yom Hashishi.” The gemara in Shabbos, daf peh ches and the gemara in Avoda Zora, daf gimmel learn from this posuk that Hashem created all of ma’aseh bereishis in the z’chus of the Yom Hashishi when the Jews will eventually be mekabel the Torah. Hashem made a condition with the world; if the Jews will accept the Torah, then the world will exist. If they do not accept the Torah, the world will return to its former state of emptiness.

The above discussion correlates to the chachomim who are of the opinion that the Torah was given on Vov Sivan –Yom Shishi. The Tosfos in Avoda Zora brings up the following question. According to Reb Yosi, the Torah was actually given on Zayin Sivan. How can we reconcile the above drasha if it was Zayin Sivan? Tosfos responds to this question by saying that since Moshe Rabeinu added a day on his own, the Torah was really supposed to be given on Vov Sivan. The problem with this line of reasoning is that Moshe actually learned from the posuk, “Hayom k’mochor,” that today is like tomorrow; a full twenty four hours was needed and therefore Moshe felt the Jews needed an extra day of preparation for Mattan Torah.

We can try to explain this concept with a mashal. A merchant missed mincha one day because he was busy making a deal of which his profit was five dollars. The next day he made it on time to mincha since he wasn’t busy with a business deal. A person approached the merchant and asked him, “Will you sell me the s’char of your mincha for five thousand dollars?” The merchant of course refused the offer. What is the difference between the two mincha scenarios? In the second case, the merchant had completed the mitzvah and therefore had no more yetzer hora; therefore he would not sell the mitzvah.

During the time of Kabalas HaTorah we have a similar idea. Once the Yidden accepted the Torah upon themselves, it was as if they had the Torah already, even if they actually did not receive the Torah until a day later. The kabala and acceptance of the Torah took place on the sixth of Sivan when K’lal Yisroel proclaimed, “Naaseh V’nishma!”

The significance of “Naaseh V’nishma” is abundantly clear. Let us all accept upon ourselves to keep the Torah with joy and enjoy the Yom Tov of Shavuos. The world will continue to exist in the z’chus of Torah!