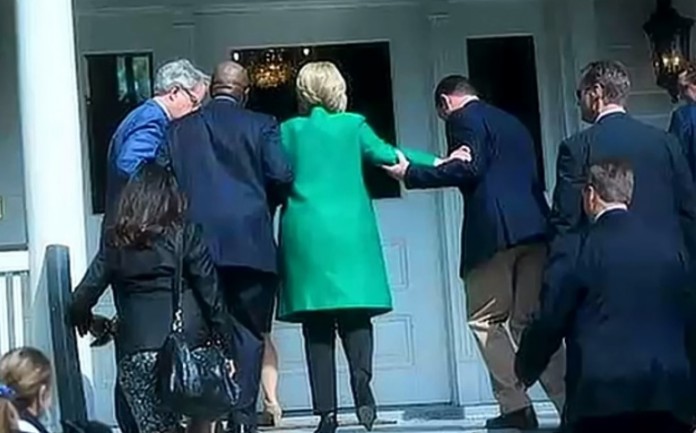 Top aides for Hillary Clinton on Monday accused FBI Director James Comey of a “double standard” in his handling of the investigation into Clinton’s use of a private email server as secretary of state.

Clinton campaign manager Robby Mook called on Comey to explain why he rushed to disclose new information about the status of the investigation into Clinton, while reportedly opposing, on the grounds that it would be too close to the election, a public statement by the FBI that the Russian government was seeking the influence the presidential race.

“It is impossible to view this as anything less than a blatant double standard,” Mook said.

Democrats are reeling from the news late last week that – a little more than a week before the election — Comey is revisiting his probe into the potential mishandling of classified material.

Aiming to quickly redirect the focus of the presidential race, the Clinton campaign seized on news reports that Comey had rejected efforts within the FBI to identify Russia as the source of hacking incidents this year, which primarily effected Democratic organizations, including Clinton campaign chairman John Podesta.

Clinton’s press secretary, Brian Fallon, said that Comey “set a standard for narrating a play-by-play for matters involving Hilary Clinton,” but has not set the same standard for inquiries into Russian hacking and potential ties to Republican nominee Donald Trump’s campaign.

“Director Comey owes the public an explanation for this inconsistency,” Fallon said.

Meanwhile, in Warren, Michigan, Trump hammered on the issue of Clinton’s emails during an afternoon rally that started more than two hours late in the Detroit suburb.

He said that he expects the FBI to find some of the 33,000 emails that have yet to be uncovered among the 650,000 emails that are reportedly on the laptop at the center of the latest controversy. He repeated his claim that Clinton’s use of a private email server “the biggest scandal since Watergate,” and told Clinton to stop blaming the scandal on others.

“”Hillary Clinton wants to blame everyone else for her mounting legal troubles,” Trump said. “But she has brought this situation onto herself. She’s got nobody to blame but herself.”

While campaigning in Ohio earlier in the day, Clinton moved to turn the conversation to national security and Trump’s fitness for office.

The Democratic presidential nominee addressed the email issue at the start of a speech at Kent State University.

“I’m sure a lot of you may be asking what this new email story is about, and why in the world the FBI would decide to jump into an election with no evidence of wrongdoing,” less than two weeks before Election Day, Clinton said. “That’s a good question.”

“I understand. And as I’ve said, I’m not making any excuses” for setting up her private email system as she did, Clinton said. “I’ve said it was a mistake, and I regret it.”

On Monday afternoon, the Justice Department responded to growing calls from a bipartisan group of lawmakers in Congress for additional information about the renewed inquiry. In a letter to lawmakers, the Justice Department said it was moving “as expeditiously as possible” to investigate the new emails, but it did not provide any additional information.

Clinton’s campaign pushed back hard all weekend against Comey’s decision. Clinton denies that her email put the country at risk, and her campaign says she testified truthfully.

Other Democrats also demanded swift answers about what Comey is looking for and why he chose to renew the inquiry less than two weeks before Election Day. Democratic senators asked for answers by the end of the day Monday.

At her rally in Ohio, Clinton predicted that the new inquiry will reach the same conclusion as Comey did at the end of the FBI investigation in July, when he announced that despite what he called sloppiness, there was no evidence of criminal conduct.

“There is no case,” Clinton said, adding that she thinks most Americans have long since decided how they feel about the email issue. “Now, what people are focused on is choosing the next president and commander in chief of the United States of America.”

Campaigning earlier Monday in Grand Rapids, Mich., Trump said that Comey had “brought back his reputation” with his notice to Congress on Friday that he would look at new information in the case.

“It took a lot of guts” for Comey to change course three months after ending the probe into whether classified information was compromised, Trump said. “I really disagreed with him” over that earlier decision. “I was not his fan. But what he did brought back his reputation.”

During her lengthy speech at Kent State, Clinton returned to an argument that has been among her most potent: that Trump’s “very thin skin” and brash, ill-informed commentary on world affairs disqualifies him as commander in chief.

“I’m running against a man who says he doesn’t understand why we can’t use nuclear weapons. He wants more countries to have nuclear weapons.” Clinton said. “And if you’re telling yourself he’s going to surround himself with smart people to stop these crazy ideas, remember this: He was asked who he consults on foreign policy. Donald Trump said he doesn’t need to consult because, and I quote, ‘I have a very good brain.’ ”

Turning to Trump’s relationship with Vladimir Putin, Clinton said the Russian president is playing Trump for a patsy.

“He knows he can use flattery to get into Donald’s head, to make Donald the Kremlin’s puppet,” she said of Putin, “and it seems to be working. Donald has signaled to Putin that he will let Russia do whatever it wants.”

She also ran through a series of Trump remarks about the NATO alliance, U.S. nuclear umbrella in Asia and other topics that she said show him to be ignorant or reckless.

“This is one of those make-or-break moments for our nation,” she said.

Aside from changing the subject from the emails, Clinton’s efforts in Ohio are part of a strategy to create several paths to an electoral college victory – the simplest of which would be to win Florida. Clinton spent the weekend campaigning in the Sunshine State, where some polls show Trump leading.

But the campaign has encountered significant obstacles over the weekend after Comey reignited a political firestorm when he said FBI officials had detected a batch of emails pertinent to the earlier case during an “unrelated” investigation.

People close to the situation have told The Washington Post that the emails were found on a computer belonging to disgraced former congressman Anthony Weiner. Weiner is the estranged husband of Clinton campaign vice chairman Huma Abedin.

Abedin, who is very often the aide closest to Clinton’s side on trips, has been absent from the campaign plane since the Comey news broke.

In Michigan when Trump first brought up Clinton’s emails, the crowd began to loudly chant: “Lock her up! Lock her up!” In the audience was a woman dressed up in an orange prison jumpsuit labeled “Clinton.”

Clinton opened the last full week of campaigning Monday with a television advertisement revisiting the famous 1964 “Daisy” ad about the looming danger of nuclear weapons. The new ad features the same woman who, as a small girl, plucked petals from a flower in the original ad for President Lyndon Johnson’s campaign, which was aimed at Republican presidential nominee Barry Goldwater.

Clinton’s goal at rallies Monday near Cleveland and in Cincinnati is to keep up enthusiasm among Democrats and encourage more early voting this week. Former president Bill Clinton campaigned for his wife in Cleveland over the weekend, and President Obama is due in Columbus on Tuesday.

Trump leads Clinton in Ohio by 1.3 percentage points in the RealClearPolitics average of recent polls. That is within the margin of error, meaning the race is effectively tied.

On Sunday night, the FBI obtained a warrant to review the emails, which one official said include a significant number of messages associated with Clinton and Abedin. In his letter to Congress, Comey said that whether the emails provide any new information to the Clinton investigation had yet to be determined, but Democrats worry that the news could sway the election.