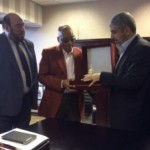 “For the ANC to welcome Hamas leader Khaled Mashal to South Africa is a moral outrage, and disgraces the memory of Nelson Mandela,” said Goldstein, chief rabbi to South Africa’s sizable Jewish community since 2005.

“Hamas openly promotes the most brutal violence as a religious ideal and is an ideological ally of Boko Haram, which wreaks unspeakable horror and suffering on the African continent. Welcoming such an ideology endangers Africa and the world,” Goldstein told The Algemeiner.

“This invitation buoys up and encourages terrorism while blatantly and unashamedly ignoring the position of the international community, which designates Hamas as a terrorist organization,” the ministry said in a statement.

The meeting was reported on Monday by an account linked to the ANC party and followed by at least 214,000 users on Twitter. During the talks, Mashal presented Zuma, Mantashe and ANC National Chairperson Baleka Mbate with gifts. The Hamas leader announced that the two parties had signed a letter of intent and discussed “mutual relations.”

Mantashe said the statement of intent sought to build a “long-lasting relationship” between the ANC and Hamas, in South Africa.

Earlier this year, the ANC announced that the government would review dual-citizenship laws in South Africa, especially to keep South Africans from serving in the Israel Defense forces. The issue raised eyebrows in South Africa’s Jewish community, with Goldstein producing a YouTube video protesting the move. During the clip, Goldstein accused ANC leaders of playing into Hamas’ hands.