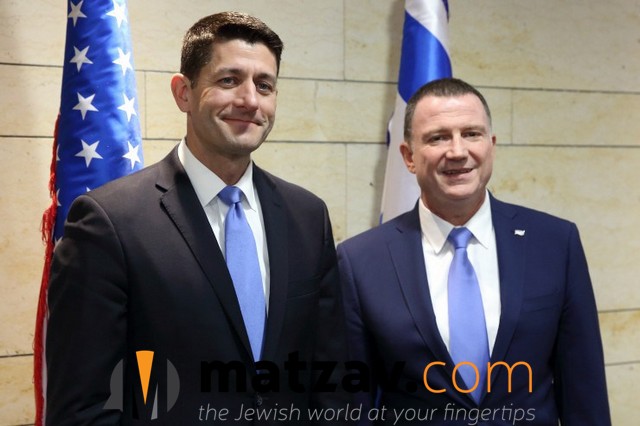 Speaker of the US House of Representatives Paul Ryan stressed that the US relationship with Israel is more important than ever at a meeting Monday morning at the Knesset with Knesset Speaker Yuli Edelstein.

“We will work shoulder to shoulder with you against threats,“ Speaker Ryan said. “That’s why I came here and this is the point I wanted to stress.”

“Our friendship with Israel is more important to us than it was in the past,” Ryan added at the meeting with his Israeli counterpart.

Following Congressional legislation last June requiring European trade partners to reject BDS, members of Congress introduced the Combating BDS Act of 2016 this past February, which gave federal approval to US states to divest from or prohibit investment in entities associated with BDS [the Boycott, Divestment and Sanctions Movement against Israel].

“I and members of Congress are working and fighting vigorously with every discovery of BDS and boycott of Israel,” Ryan emphasized.

Paul Ryan has been Speaker of the House for about half a year after having been elected to the position last October following the resignation of his predecessor John Boehner. Ryan elaborated upon his display of friendship with Israel during his current tenure as Speaker of the House.

“I entered the position not too long ago and my first work meeting was with President Reuven Rivlin,” noted Ryan. “Also, this trip of mine to Israel is my first [as Speaker of the House].”

“This was not done by accident,” continued Ryan. “I wanted to come to Israel first to emphasize the level of US commitment to Israel and the valiant friendship with Israel is important to us.”

Speaker Edelstein also expressed his appreciation for the friendship between the United States and Israel.

“We know we have true friends in the US, in Congress, and in the White House,” Edelstein said to Ryan. “I very much appreciate your presence here along with an entourage of other members of Congress.”