Whatever you want to call it, the East Coast is bracing for Hurricane Sandy, a “rare hybrid storm” that is expected to bring a life-threatening storm surge to the mid-Atlantic coast, Long Island Sound and New York harbor, forecasters say, with winds expected to be at or near hurricane force when it makes landfall sometime on Monday.

According to the National Hurricane Center, the Category 1 hurricane was centered about 270 miles southeast of Cape Hatteras, N.C., and 530 miles south of New York City early Sunday, carrying maximum sustained winds of 75 mph and moving northeast at 15 mph.

“If you don’t evacuate, you’re not just putting your own life at risk,” Mayor Bloomberg said at a news conference Sunday. “You’re endangering first responders who may have to rescue you.”

Earlier, New York Governor Andrew Cuomo announced the suspension of all MTA service–including subways, buses, Long Island Railroad and Metro North–beginning at 7 p.m. Sunday. New York City Public Schools will be closed on Monday, the mayor said. The New York Stock Exchange said its trading floor will be closed on Monday, too–the first such shutdown in 27 years, according to the Wall Street Journal.

Sandy is expected to continue on a parallel path along the mid-Atlantic coast later Sunday before making a sharp turn toward the northwest and southern New Jersey coastline on Monday–with the Jersey Shore and New York City in its projected path.

But the path is not necessarily the problem.

“Don’t get fixated on a particular track,” the Associated Press said. “Wherever it hits, the rare behemoth storm inexorably gathering in the eastern U.S. will afflict a third of the country with sheets of rain, high winds and heavy snow.” 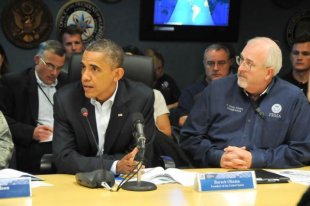 A tropical storm warning has been issued between Cape Fear to Duck, N.C., while hurricane watches and high-wind warnings are in effect from the Carolinas to New England. The hurricane-force winds extend 175 miles from the epicenter of the storm, while tropical storm-force winds extend 500 miles–or roughly 1,000 miles end to end, making Sandy one of the biggest storms to ever hit the East Coast.

“We’re looking at impact of greater than 50 to 60 million people,” Louis Uccellini, head of environmental prediction for the National Oceanic and Atmospheric Administration, told the Associated Press.

“The size of this alone, affecting a heavily populated area, is going to be history making,” Jeff Masterswrote on the Weather Underground blog.

President Barack Obama received a briefing on the storm at Federal Emergency Management Agency headquarters in Washington on Sunday. “My main message to everybody involved is that we have to take this seriously,” President Obama said. “[We will] respond big and respond fast.”

“I can be as cynical as anyone,” Christie said on Saturday, announcing a state of emergency. “But when the storm comes, if it’s as bad as they’re predicting, you’re going to wish you weren’t as cynical as you otherwise might have been.”

Meanwhile, emergency evacuations were being mulled by state officials in Connecticut, Massachusetts, Vermont, New Hampshire and even Maine. 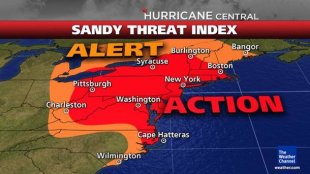 “This is not a coastal threat alone,” said FEMA director Craig Fugate said during a media briefing early Sunday. “This is a very large area.”

Forecasters also fear the combination of storm surge, high tide and heavy rain–between 3 and 12 inches in some areas–could be life-threatening for coastal residents.

According to the National Hurricane Centersummary, coastal water levels could rise anywhere between 1 and 12 feet from North Carolina to Cape Cod, depending on the timing of the “peak surge.” A surge of 6 to 11 feet is forecast for Long Island Sound and Raritan Bay, including New York Harbor.