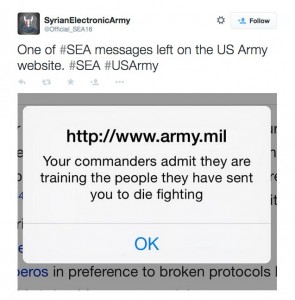 The Syrian Electronic Army hacked the U.S. Army’s official website on Monday, the SEA claimed on Twitter.  Army.mil was down as of 2:50 PM and various screenshots appearing on Twitter showed pro-Assad propaganda on the site before it crashed.

The SEA are hackers affiliated with the Syrian regime who’ve previously hacked high-profile targets like the New York Times in 2013.