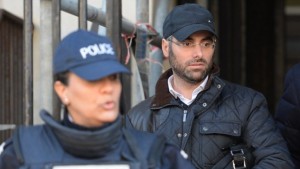 A 15-year-old supporter of the Islamic State group who slashed a Jewish teacher, Binyomin Amsellem (pictured) with a machete in southern France has said he was “proud” of his attack, ahead of a court appearance Wednesday.

The teenager, an ethnic Kurd from Turkey, told police he did not regret the assault on a Jewish teacher in Marseille, the latest in a string of such attacks in recent months.

A source close to the investigation told local media the boy had said he was “ashamed” that he did not manage to kill the 35-year-old teacher.

The teenager, who was to appear in front of a judge on Wednesday where he faces terrorism charges, said he became interested in jihadist theories in March 2014 after seeing documentaries arguing that Muslims were persecuting Westerners.

“One thing led to another and he came upon jihadist websites” arguing that in fact it was Westerners that were persecuting Muslims and he “agreed”, said the police source.

“I don’t represent Daesh, they represent me,” the teenager reportedly told investigators.

Prosecutors have described the teenager as a good student, from a normal background who self-radicalized via the Internet, highlighting the challenge to French authorities in identifying extremists. Read more at Times of Israel.