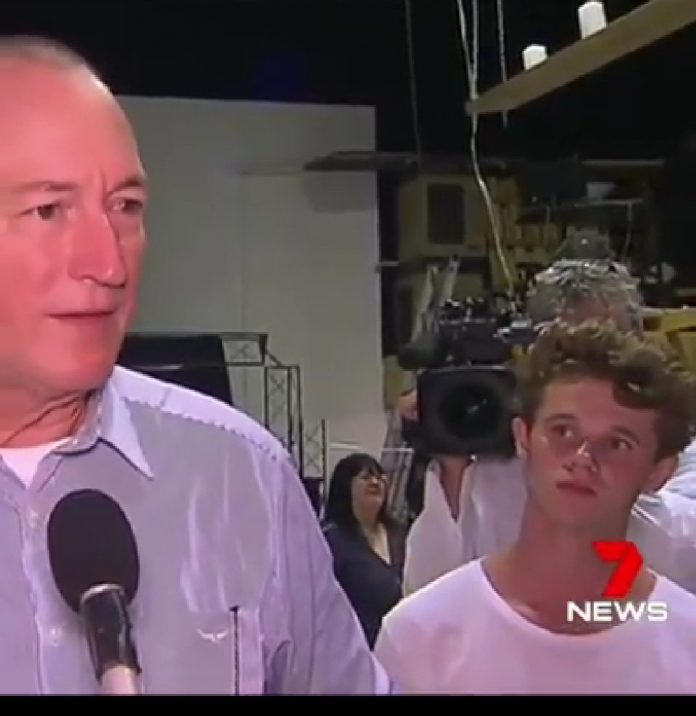 A swoopy haired teen, dressed in a T-shirt, positions himself behind Australian Sen. Fraser Anning during a news conference in Melbourne and raises his phone with his left hand. Then he calmly lifts his right hand and cracks a raw egg on the back of Anning’s closely shaved head.

The far-right lawmaker had sparked outrage Friday when, after 49 people were killed in a terrorist attack on two mosques in Christchurch, he said that Muslims “may have been the victims today; usually they are the perpetrators.”

“The real cause of bloodshed on New Zealand streets today is the immigration program which allowed Muslim fanatics to migrate to New Zealand in the first place,” he wrote in a statement.

A day later, he was standing in front of a group of reporters with raw egg dripping down the back of his neck.

So Fraser swiftly turned around and punched the young man in the face. He then lunged for him again, throwing another punch before the two were separated and a group of adult men tackled the 17-year-old, pinned him to the floor and held him in a chokehold.

Footage of the encounter immediately went viral – a seven-second video had more than 2 million views just hours after it was posted.

After Anning released his statement on Friday, Australian Prime Minister Scott Morrison tweeted that Anning’s comments “are disgusting” and “have no place in Australia, let alone the Australian Parliament.”

But Anning reportedly doubled down on his statements on Saturday. The Sydney Morning Herald reported that Anning mentioned in the news conference that many of his supporters in his home state of Queensland are under the age of 35. Noting that the Christchurch shooter was 28, one Anning supporter called out that “it’s the younger generation taking up the fight.”

Anning replied by saying, “well, he’s obviously a little on the crazy side, but yeah.”