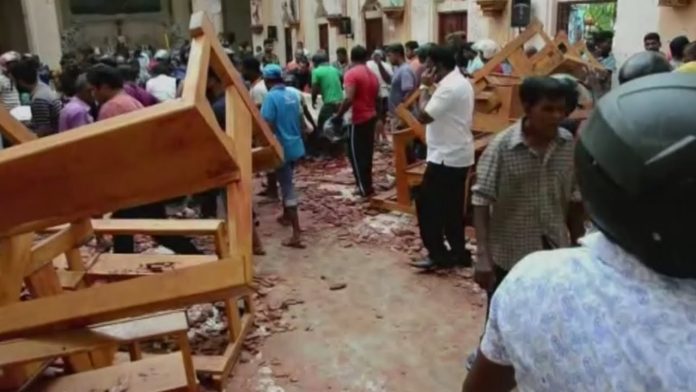 Suicide bombers struck churches and hotels in Sri Lanka on Sunday, killing more than 200 people in a highly coordinated attack that targeted Christians and foreigners in this island nation.

No group claimed responsibility for the attacks, the worst violence here since the end of the civil war a decade ago. Thirteen people have been arrested, police said, and three police officers were killed in a raid on a house as they attempted to interrogate an individual.

Prime Minister Ranil Wickremasinghe said the suspects were “local.” He told reporters that elements of the government had prior intelligence about the attacks.

“Information was there,” he said at a news conference. “That is a matter that we need to look into.”

Blasts ripped through three churches in the cities of Colombo, Negombo and Batticaloa at approximately 8:45 a.m. as worshipers were gathering for services, police said. Bombers also struck three hotels and a banquet hall in Colombo, the nation’s capital.

Ruwan Wijewardene, Sri Lanka’s defense minister, said the attacks were carried out by suicide bombers. Six of the bombings occurred between 8:45 and 9:30 a.m.

There was a seventh blast at a banquet hall about 2 p.m., and an eighth at the house raided by police at about 2:45 p.m.

Sri Lanka is a predominantly Buddhist nation but is also home to significant Hindu, Muslim and Christian communities. Easter is the holiest day of the Christian calendar.

Three police officers were killed in a “scuffle” at a house in the Demtagoda area of Colombo, police said. They had gone to the house to interrogate an individual.

At least 11 of the dead at National Hospital in Colombo were foreigners, including two who held U.S. and British citizenship, according to the Foreign Ministry.

“Attacks on innocent people gathering in a place of worship or enjoying a holiday meal are affronts to the universal values and freedoms that we hold dear, and demonstrate yet again the brutal nature of radical terrorists whose sole aim is to threaten peace and security,” he said in a statement.

Wickremesinghe, the prime minister, condemned “the cowardly attacks on our people today” and urged the country to remain “united and strong.”