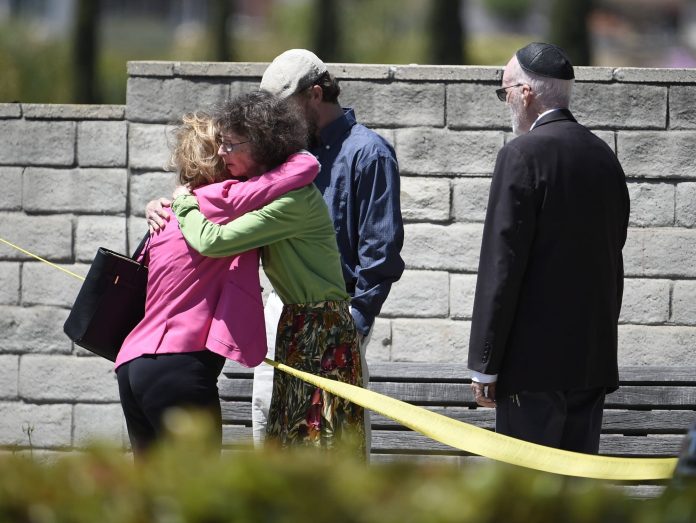 A 19-year-old gunman opened fire at the Chabad of Poway synagogue in Poway, California, on Shabbos morning, leaving one dead and three injured, according to authorities.

One of the victims, an adult female, “succumbed to their wounds,” Vaus said. The three others – one female child and two adult males – remain in the hospital with non-life-threatening injuries. All three were in stable condition.

“I can only tell you that we have a fatality,” Vaus told MSNBC, “and I can also tell you that it was a hate crime, and that will not stand.”

The San Diego County Sheriff’s Department responded to reports of an active shooter at the synagogue just before 11:30 a.m. Two separate minyanim were in progress at the shul at the time of the shooting.

The Poway Sheriff’s Station confirmed the shooting via Twitter, after deputies were called to the scene by “reports of a man with a gun.”

Police said a 19-year-old white male suspect turned himself in shortly after the shooting. Officials said the man had an assault rifle in his car, and is in custody for questioning.

Among the injured was Rabbi Yisroel Goldstein, whose hand was wounded.

Minoo Anvari, a member of the congregation, told CNN that “[Goldstein] did not leave his congregation until he was finished speaking to them – calming their fears and pledging resilience.”

Anvari, whose husband was inside when the gunfire began, said, “Everybody was crying and screaming.”

Shabbos marked the six month anniversary of the massacre at Pittsburgh’s oldest synagogue, Tree of Life, where an armed shooter killed more than 11 people and injured six others in the deadliest attack on Jews in the history of the United States.

President Donald Trump expressed his “deepest sympathies” for the victims of the shooting, which he said “looks like a hate crime,” prior to departing for a rally in Wisconsin.

“My deep condolences to all of those affected,” the president added.