Mordecai Z. Dzikansky, Retired Detective First Grade, spent his 25 year police career with the New York City Police Department. A native of Brooklyn, Detective Dzikansky was appointed to the NYPD in 1983 and served as uniformed patrolman for two years in Brooklyn North. He served in the Organized Crime Control Bureau, the elite Manhattan South Homicide Squad and the Midtown North Detective Squad, where he received the Chief of Detectives Certificate of Achievement.In 1993, after a rash of synagogue burglaries in the Metropolitan area, Detective Dzikansky was selected to be lead investigator of the then newly formed specialized Torah Task Force. The task force affected numerous arrests and successfully recovered many of the sacred Torah scrolls. In addition, Detective Dzikansky was selected to work on terror related investigations including the murders of MK Meir Kahane and Ari Halberstam (Brooklyn Bridge murder).

From January 2003 through September 2007 Detective Dzikansky was posted in Israel as the first NYPD Intelligence Division Overseas Liaison to the Israel National Police. His main focus was intelligence gathering and the immediate relay of key information back to NYC to enhance the Department’s ability to recognize, react to and prevent or recover from terrorist acts. He responded in person to and analyzed 21 bombing scenes in Israel and several attacks globally, including events in Turkey, Russia, Spain and Egypt. Detective Dzikansky worked with senior members of the Israeli intelligence community on joint investigations which connect NYC and the State of Israel.

In 2009, his works The Phenomenon of Suicide Bombings in Israel: Lessons Learned and Transportation System Vulnerabilities were published in Countering Terrorism, National Academy of Sciences.

He currently lectures and consults on global security and policing topics and is called upon by various law enforcement agencies, academic/think tanks and community organizations to provide first-hand analysis of the current terror trends, lessons learned and world-wide applications in preventing and responding to terrorism. Most recently, he was a featured speaker at the 2009 annual International Conference on Global Terrorism at ICT, Herzliya, Israel. Detective Mordecai Z. Dzikansky is the author of Terrorist Cop: The NYPD Jewish Cop Who Traveled the World to Stop Terrorists. 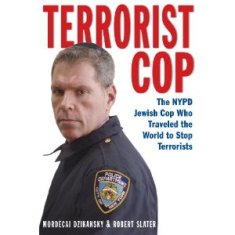 According to the description of Terrorist Cop: The NYPD Jewish Cop Who Traveled the World to Stop Terrorists, “Terrorist Cop is a colorful, haunting, and highly graphic tale of New York City homicide detective Morty Dzikansky. Dzikansky’s career began with a yarmulke on his head, patrolling Brooklyn’s streets, and going undercover to catch a band of Torah thieves. Post 9/11, the NYPD sent Dzikansky to Israel to monitor suicide bombings as part of Commissioner Ray Kelly’s plan to protect New York from further terror which led to him becoming an expert on suicide bombings. The result also led to Dzikansky’s own private descent…as a post-traumatic stress disorder victim.”