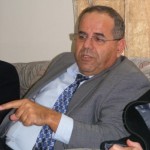 The government of Yemen recently issued a proclamation that all Jews in the country must leave or convert to Islam, Israeli Deputy Minister of Regional Cooperation, Likud MK Ayoob Kara told The Algemeiner on Sunday.

According to Kara, failure to exercise one of the two options would spell grave danger for the country’s estimated 80 remaining Jews, whom the government said it would “not be able to protect.”

Kara, a member of Israel’s Druze community, revealed that he received this information in a meeting today with a Yemenite Jew, who was able to come to Israel by disguising himself as a Muslim. According to Kara, the man left Yemen a few days ago, traveling via Saudi Arabia and Jordan to Israel.

Kara said he was contacted because of his appearances in Arabic media outlets, and his efforts to aid minorities – including Jews, Christians, Druze and others – living in fear in Muslim countries.

Kara said he will be meeting with Prime Minister Benjamin Netanyahu tomorrow — and with Jewish Agency Chairman Natan Sharansky and Minister of Immigrant Absorption Sofa Landver shortly thereafter – to discuss rescuing the Jews of Yemen.

When contacted by the Jerusalem Post about the matter, both the Jewish Agency and Israel’s Foreign Ministry declined to comment on their efforts, due to the sensitivity of the issue.

Yemen’s Jewish community numbered around 50,000 in the 1940s, but the vast majority fled to Israel shortly after the founding of the Jewish state in 1948. The Algemeiner