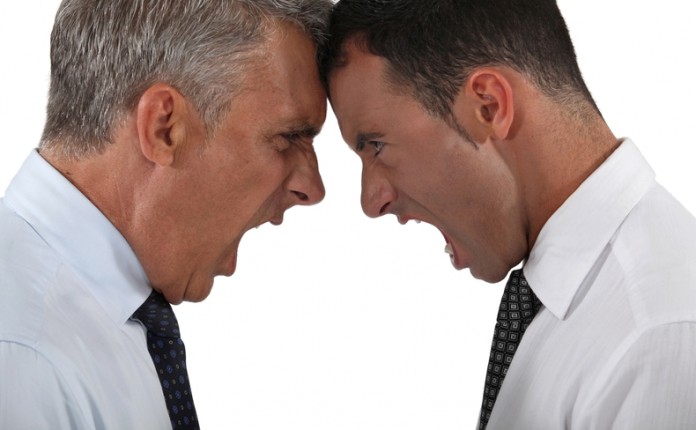 There is a famous parable told about a shul whose members got into a fight one Shabbos with regard to their minhag about reciting a certain part of the yotzros. After much discussion and petty bickering it was decided to ask the oldest member of the shul what the minhag was, to settle it for once and for all. To the chagrin of all, he sadly responded that what they had been doing is what had been going on this shul since time immemorial. Fighting and arguing is a way of life for some people they do it so often that they are simply used to it.

Let’s not be those people. Let us take a step back and clear headedly take stock of that which ills us and seek solutions.

Don’t think that just because Avrohom Avinu fought the idol worshippers, Yitzchok had conflict with Avimelech, Yaakov had to deal with Lovon, and the Shivtei Koh had disagreement amongst themselves, this is our minhag, mesorah or something tolerable to have amongst us at all.

Being that I am honestly not a baal mussar, rov, rebbe or rosh yeshiva and possess no public position of any kind, I can say that I really mean no one with these words. However if you think that it’s directed at you, then, please take my words to heart. Yes, I mean you.

We all know Yosef revealed himself to the Shvotim in Egypt by declaring, I am Yosef, is my Father still alive. This question of Yosef’s was a rhetorical question intended to evoke their deepest feelings of teshuva and regret for having sold him to be a slave in Mitzrayim.

The seforim hakdoshim maintain that all the questions that we have on the Borei Olams running of the world will be answered not by answers, but by a moment of absolute clarity with the advent of Moshiach, may it be speedily and in our days.

Such was the declaration of Yosef Hatzadik, I am Yosef is my father still alive, a moment of revelation to the Shevotim that they had erred in their judgement. Ki lemichya shlachani Hashem, I was sent to be here now to feed you, was all Yosef said before embracing each of his brothers and crying with them.

The Shevotim had their answer, but we need to follow further into the sequence of events for how this was resolved.

In the next Parsha, Vayechi, contains the next conversation of Yosef with his brothers about Mechiras Yosef. Upon returning to Mitzrayim after haven successfully gotten out of Egypt to fulfill Yaakov Avinu’s instructions to bury him in Eretz Yisroel, the Shvotim offer themselves to Yosef as slaves, in fear of his retribution for having sold him to Egypt as a slave.

Yosef comforts his brothers and reassures them again that it was Hashem and He alone that sent him fortuitously ahead to Mitzrayim.

In this repetition, Yosef adds a key phrase to his words. V’atem chashavtem olay ra’ah, Elokim, chashava letova. He validated their expression of teshuva by acknowledging that they truly had bad intentions with their actions of selling him, but Elokim chashavah letovah, within your actions Hashem was only doing good, what was and what is for the ultimate good.

The great Rebbe of Vorki, Rebbe Yitzchok Zt”l, explained a tremendous teachable moment from this episode and explained it as follows.

You the holy Shevotim truly thought badly of me and sought to harm me. Why did you want to harm me and think badly? Because you made a mistake in judgement and you thought that I was actually bad and deserving of the punishment you meted out to me justifiably.

In truth, real ultimate divine truth, the actual reason you made this mistake and I was sent to Mitzrayim was for no other reason than Lehachayos am rov, to feed you and save you in this period of famine.

Thus explains The Vorker Rebbe is the source of most machlokes, fights and disagreements. Mistakes and misunderstanding are a great source of discord. Often times it is quite open as each side contends that if the facts of the case were as the other side claims, I would actually be in agreement with them, but the facts are otherwise…

In fact the tzadik related that he himself was once the object of such a misunderstanding. He was once accosted by a woman, who was an Agunah, with shouts and blows as he came into a town that he should give her a Get! Upon getting dragged to the local beis din in spite of his claims of not knowing this woman, he was able to demonstrate that it was a simple case of mistaken identity and that this poor woman had mistaken him for her absconded husband.

Thereupon the woman who just moments ago was beating and screaming at him fell at his feet crying and begging for forgiveness for having falsely accused him.

The Rebbe told her, fear not, I am not the least upset with you. You truly thought you were accosting the man who abandoned you to a miserable fate. You did not mean to attack me at all and had you realized who I was, or rather who I am not, you wouldn’t have gotten upset at all.

Let us apply this timely lesson to its practical application.

With that community issue, that theological issue or even that run in that you had with your neighbor, do you have all the facts? Do you really know all the pertinent information? On matters of theology and public policy, is it a person or an idea that I am taking issue with? And lastly, about that communal imbroglio, is it really my business to the extent that I must interject myself into it? Do I really need to be involved? Will I be the one to resolve this machlokes or will my discussing it serve to simply fan the flames? Let us try to avoid loshon horah and gossip, leave leadership to the leaders and may we all be blessed with shalom al Yisroel.