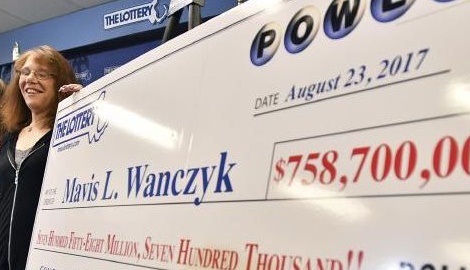 Ladies and gentlemen, we have a winner.

Mavis Wanczyk won the second-largest lottery prize in U.S. history Wednesday, a $758 million Powerball jackpot that she celebrated by calling in newly rich, telling her longtime employer that she would not be coming in to work. Not now, and not ever.

The 53-year-old from Chicopee, Massachusetts, said on Thursday that she was just starting to come down – barely – from the shock and overwhelming excitement of discovering that she held the lone winning ticket.

“Last night, it was kind of like – I didn’t realize I had won,” she said at an afternoon news conference, where she smiled and posed with a giant check, on which the following was written: “PAY TO THE ORDER OF: Mavis L. Wanczyk $758,700,000.”

“I had a pipe dream, and my pipe dream finally came true,” she added, explaining that she had hoped to retire early from Mercy Medical Center, where she has worked for 32 years.

Or had worked, anyway: After winning the Powerball, Wanczyk said, “I called them and told them I will not be coming back.”

Now, Wanczyk said that she just wants to “be alone and just be able to be me.”

Wanczyk, a regular lottery player, said she bought two quick-pick tickets but chose the numbers on the winning ticket that she purchased at a Pride Station & Store in Chicopee: 6, 7, 16, 23 and 26, plus the Powerball number, 4.

The payout, which can be taken in a lump sum or in 29 yearly payments, is estimated to be around $443 million, depending on state taxes.

Officials with the Massachusetts States Lottery initially reported that the winning ticket had been purchased at the Handy Variety convenience store in Watertown, about nine miles west of Boston.

The lottery later corrected that statement, saying the lone ticket had been purchased more than 80 miles from Watertown, in Chicopee, where Wanczyk lives. Handy Variety, in fact, sold a $1 million prize, according to the state lottery.

Officials said another $1 million prize was sold in the state, at Sandy’s Variety in Dorchester.

Michael Sweeney, executive director of the Massachusetts State Lottery, apologized Thursday afternoon for the mix-up, saying it was the result of a “human error” but added that the lottery’s internal systems always had the correct information. He said those internal systems ran a routine report in the morning identifying Chicopee as the correct location, and lottery officials then checked to ensure that it was accurate.

Bob Bolduc, founder of Pride Station & Stores, where the prize was actually purchased, said the multimillion-dollar winning ticket was sold at about 2:30 p.m. Wednesday. He said that in the past year the convenience store chain has sold a handful of winning tickets worth $1 million or more, and he suspects that will “resonate with a lot of lottery buyers.”

Bolduc told reporters that the convenience store will receive a bonus for selling the winning ticket and plans to donate it to local charities throughout western Massachusetts.

“We just all happen to be the lucky people involved, that’s all,” he said. “And we’re glad to be able to pass it on. So I’m happy in that sense; there are a lot of needs around here.”

Thirty-four others across the United States won $1 million.

Powerball is played in 44 states, the District of Columbia, Puerto Rico and the U.S. Virgin Islands.

To win the jackpot, a person must correctly pick all six numbers. The odds are roughly 1 in 292 million.

As The Washington Post’s Alex Horton reported: “Tweaks to the game in October 2015 increased the number of total balls, from 59 to 69, from which players need to pick five. It may seem like a modest change, but the odds of winning the jackpot plummeted.”

Tweaks to the game in October 2015 increased the number of total balls, from 59 to 69, from which players need to pick five. It may seem like a modest change, but the odds of winning the jackpot plummeted.

“Powerball has been revamped seven other times in its 23-year history so that the game can continue to be attractive to players by delivering the big jackpots that players want, and these new changes will do just that,” Gary Grief, executive director of the Texas Lottery, said in a statement when the change was implemented.

It worked: Last year, the jackpot hit a historic $1.6 billion, which was split three ways in January 2016.

Wednesday’s jackpot might have been the second-biggest, but many expected it to actually surpass that $1.6 billion record if that lucky Massachusetts ticket-holder hadn’t hit on the right numbers. That’s because of what Kelly Tabor, a spokeswoman for the Colorado Lottery, calls “jackpot chasers,” casual players who rush out to buy a ticket when the jackpot gets big enough.

Wanczyk, Wednesday’s Powerball winner, needn’t fret, though: Lottery officials said it was the largest jackpot ever won by a single ticket in North America.