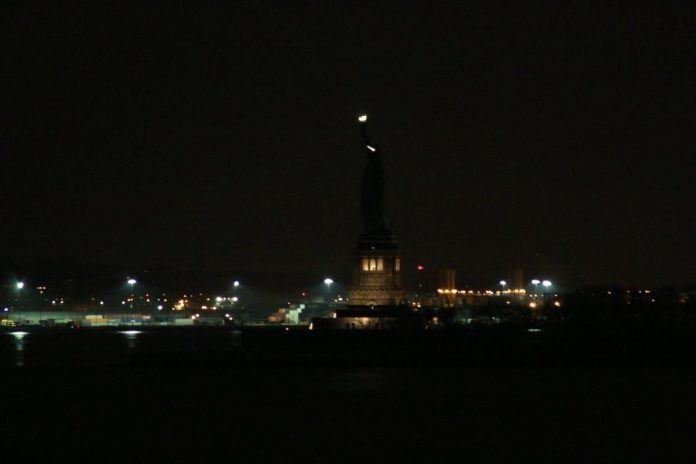 For more than an hour Tuesday night, a cloak of darkness covered Lady Liberty. Some of the lights that normally illuminate the statue went off before 11 p.m., leaving only her still-lit torch and crown visible to most in New York Harbor.

The near-blackout of the universal symbol of freedom was invested with great meaning on the Internet, with a consensus settling, more or less, on two interpretations.

Lady Liberty was either protesting President Donald Trump generally and more specifically his travel ban just a day after he signed the revised executive order limiting entry to the U.S. from six Muslim-majority countries.

Or she was signaling her solidarity with #DayWithoutWoman, a strike, scheduled for Wednesday, that asks women to skip work to show the world what life would be like without them.

“Give me your tired your poor your huddled masses but later. We’re closed,” one tweet said. Her lights were out because “Trump has plunged our country into darkness,” said another.

“I’ve been wondering how long before France asks @realDonaldTrump for the statue of liberty back as he clearly doesn’t respect its symbolism,” tweeted Jason Rumble.

Perhaps when her lights came back on, her forearm would display a “Nevertheless, she persisted,” tattoo, another tweet suggested. Could it be that Lady Liberty – one of the nation’s most recognizable female figures – was participating in the “Day Without a Woman?”

Indeed, Women’s March, organizers of the “Day Without a Woman,” were quick to thank the statue for “standing with the resistance and going dark” for the event.

“Lady Liberty got the memo,” the organizers added in a tweet. “That’s ONE MORE woman America CANNOT do without,” another Twitter user wrote.

On the other hand, someone else suggested, perhaps Russian hackers were to blame.

Women’s March tweeted: Thank you Lady Liberty for standing with the resistance and going dark for #DayWithoutAWoman

Ultimately, the lights came back on at about midnight and the National Park Service, ever the spoiler, explained what might have happened, stressing that crews had not yet inspected the scene to establish a definitive cause.

The parks staff suspected the outage was related to ongoing work on a new emergency backup generator for Liberty Island, according to Jerry Willis, a public affairs officer for the NPS. To activate the generator – a replacement for a generator damaged in Hurricane Sandy in 2012 – parks staff had prepared for a lighting outage later in the week, Willis told The Washington Post.

Willis suspected that a setting on the timer for the lighting system was changed, moving up the outage.

Willis insisted it was “not in any way” related to the “Day Without a Woman.”

“We don’t use the lighting system to back any particular cause,” he said.

Lady Liberty’s lights last went off for a prolonged period during Hurricane Sandy, when about 75 percent of the island’s 12 acres was underwater, causing serious damage that would keep the island closed for eight months for repairs. Though the statue was unscathed, its lights turned off when the island lost electricity. It was later illuminated by temporary floodlights powered by a generator.

In July 2015, a new light-emitting diode (LED) light system was installed to do the job.

“We know how important it is that she stays lit, so we do our very best to keep it that way,” Willis said.

He said that given recent news, the symbol of Lady Liberty has been used “quite a bit as of late” and is “at the forefront of a lot of what’s going on in the world.”

Last month, activists unfurled a banner with the words “Refugees Welcome” on the statue’s observation deck after the Department of Homeland Security began implementing Trump’s crackdown on illegal immigration. The sign was removed more than an hour later.

The New Yorker’s anniversary issue last month featured “Liberty’s Flameout,” a cover image of Lady Liberty lifting up an extinguished torch, in response to the opening weeks of the Trump administration.

“It used to be that the Statue of Liberty, and her shining torch, was the vision that welcomed new immigrants. And, at the same time, it was the symbol of American values,” said the artist, John W. Tomac. “Now it seems that we are turning off the light.”