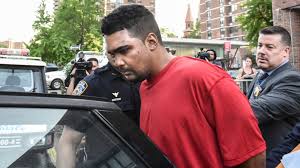 The driver that rammed into pedestrians in Times Square, killing an 18-year-old woman and injuring 22 others, has been identified as 26-year-old Richard Rojas, of the Bronx.

The girl who was killed has been identified as Alyssa Elsman. Her thirteen-year-old seister was also struck in the attack but survived.

Just last Thursday, Rojas was arrested for menacing after he allegedly pulled a kitchen knife on a visitor to his Bronx home. He also has 2015 and 2008 DWIs, and an arrest for  suspected battery in in 2012.

While sources say Rojas tested positive for marijuana, further testing is being done to determine whether there were any additional drugs in his system.

Friends say Rojas told people he works in real estate, but it’s unclear if he had any kind of realtors license, Carlin reported.

Police sources describe Rojas as emotional disturbed and say he made rambling statements being arrested indicating he intended the incident to result in suicide by cop after, Grymes reports.

Officials said there is no indication the incident was terror related. Charges are pending. Read more here.