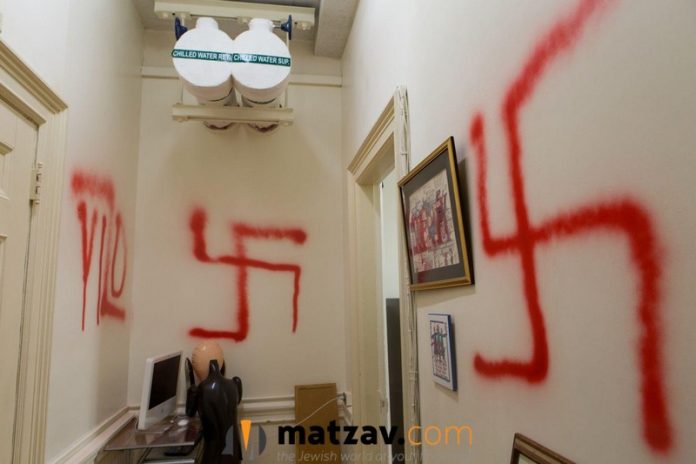 The antisemites came for Israelis.

They relentlessly attacked the lone democracy in the Middle East and the realization of a 3,500-year-old vision, with the aim of its destruction. No sovereignty allowed for nearly seven million Jews!

But, hey, I wasn’t Israeli, so it didn’t really touch me.

For decades, they repressed millions of Soviet Jews.

They identified those Jews by internal Soviet passports that declared a person’s nationality based on the nationality of the parents — and, since the days of Stalin, Jews were officially deemed a nationality. No escape from that. Through scapegoating and vilification, they made life impossibly difficult for Jews when it came to education, jobs, street life, and more. And they sought to ensure that Jews had no access to accurate information about Judaism, Jewish history and tradition, Hebrew language, or Israel — in other words, cultural genocide.

But, hey, I wasn’t a Soviet Jew, so it didn’t really touch me.

They made life tough for Ethiopian Jews.

Frequently the targets of persecution and discrimination, Ethiopian Jews, one of the world’s most ancient communities, lived in constant fear of their non-Jewish neighbors, to the point that thousands died while seeking to escape on foot to neighboring Sudan — and eventually found refuge in the Israel at the center of their millennia-long prayers.

But, hey, I wasn’t an Ethiopian Jew, so it didn’t really touch me.

They emptied most Arab countries of their Jewish communities.

Hundreds of thousands of Jews, who had lived for centuries in what are today Algeria, Egypt, Iraq, Lebanon, Libya, Sudan, Syria, and Yemen, all fled hatred, deadly mobs, and unending persecution. Only small communities remained in Morocco and Tunisia. And the Jewish populations in neighboring Iran and Turkey declined dramatically, while in Afghanistan the Jews are no more.

But, hey, I wasn’t a Mizrahi or Sephardic Jew, so it didn’t really touch me.

Beginning just over 20 years ago, the antisemites re-emerged with a vengeance in Europe.

Jews were targeted and killed in Paris, Toulouse, Brussels, Burgas, and Copenhagen. Synagogues and cemeteries were assaulted and desecrated. Jews became, once again, the targets of outlandish conspiracy theories. Anti-Israel protesters went into the streets of European cities waving the flags of Hamas and Hezbollah, genocidal terrorist groups. Some public schools became impossible for Jewish children to attend. A number of Jews, especially in France, had to change neighborhoods because of threats. Thousands of Jews made aliyah.

But, hey, I wasn’t a European Jew, so it didn’t really touch me.

They bombed the AMIA building, the heartbeat of Argentinian Jewry, the largest Jewish community in Latin America. (And the next day, they blew up a domestic flight in Panama, in which the majority of passengers were Jewish.) Eighty-five people were killed in Buenos Aires. 300 were injured. The perpetrators were Iran and Hezbollah. To this day, the community is scarred, and no one sits in prison.

But, hey, I wasn’t a Latin American Jew, so it didn’t really touch me.

Holocaust denial skyrocketed, benefiting from the global reach of social media and fading memory of the actual events.

The Holocaust, the systematic murder of six million Jews, including 1.5 million children, by Nazi Germany and its collaborators, was variously denied, distorted, trivialized, rationalized, and politicized.

But, hey, my family wasn’t affected by the Holocaust, so it didn’t really touch me.

Religious Jews, identifiable by their distinctive manner of dressing, were targeted on the street, especially in New York, harassed, mocked, beaten, and pummeled. Walking to and from synagogue entailed risks. Praying in a sanctuary the same. Shopping in a kosher food store made one vulnerable. Dining at a kosher restaurant was no longer necessarily safe. So, too, gathering for a Hanukkah celebration.

But, hey, I wasn’t a religious Jew, so it didn’t really touch me.

The haters came for pro-Israel Jews gathering peacefully in the US to show their support for Israel.

That was too much for the antisemites. Freedom of assembly be damned. The very sight of people waving an Israeli flag, supporting an American ally in the Middle East, opposing the unbridled terror of Hamas, or associating with Zionism, the national liberation movement of the Jewish people, triggered a thuggish, violent response. Those Jews needed to be put in their place.

But, hey, I wasn’t pro-Israel, not even, heaven forbid, a Zionist, so it didn’t really touch me.

Pro-Israel students on numerous campuses were under assault in the classroom or on the quad.

Hostile faculty members, aggressive student groups, the impact of intersectionality, and some weak-kneed administrators combined to create toxic environments in a number of places. A few Jews were even being questioned about their eligibility for student government positions based solely on their identity.

But, hey, not only was I not one of “those” victimized students, but I avidly supported the victimizers, so it didn’t really touch me.

Wait a second. The walls are starting to close in. All those “woke” movements I support seem to find more and more reasons to point the finger at Jews, to blame Jews, to label Jews, to exclude Jews, to demonize Jews.

I thought I was ultra-safe in my space. I joined in all the ritualistic denunciations of Zionism. I always put the universal, not the particular, first and foremost. I distanced myself from those “clannish” Jews, those Jews who could never let go of their own history. It was a point of pride to put other Jews last, not first, in my list of priorities. I was totally convinced the danger to everyone only came from the far-right, the neo-Nazis, the QAnon crowd. All my attention was single-mindedly focused on them.

I tried to show that this Jew could be relied on, even as I was being used, it turns out, to shield “my” own groups from charges of antisemitism. After all, if I was a part of the crowd, and often pushed to the front when convenient, how could they possibly be accused of antisemitism?

Oh my goodness, they’re now starting to question me. But, wait, there’s no one left to defend me.

So, to the antisemites, my “good” (Jewish) credentials don’t count for much, at least not for long. No exemptions, it seems.

I thought I could save myself by, in effect, selling out millions of other Jews. Instead, I sold my dignity and got nothing, absolutely nothing, in return, except a punch-in-the-gut lesson in reality.

David Harris is CEO of American Jewish Committee (AJC). Please join 99,200 others and follow him on Twitter @DavidHarrisAJC.