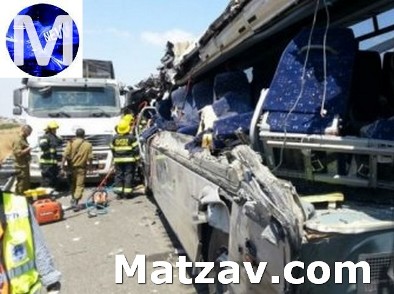 Israel – A devastating car accident involving a bus and a truck on Route 6 at the Sorek interchange has left four people dead and at least 14 injured. Magen David Adom medics and police forces are at the scene. Air Force helicopters were also called to assist in rescue efforts.

A preliminary investigation by traffic police stated that a garbage truck was parked on the side of the road, when a bus, which was not speeding, hit the truck for an unknown reason.