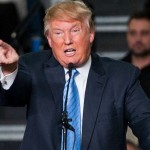 The DC Media has spent the last two weeks attempting to destroy Donald Trump with lies. Outright lies, and they are doing so in order to protect a 14 year-old cover up. Not only have eyewitnesses and contemporaneous reports proven Donald Trump 100% correct about Muslims celebrating 9/11,  a just-uncovered  local CBS News (WCBS-TV in New York) report completely vindicates Trump’s claim of “thousands and thousands” of Muslims celebrating the fall of the World Trade Center.

Just a couple of blocks away from that Jersey City apartment the F.B.I. raided yesterday and had evidence removed, there is another apartment building, one that investigators told me, quote, was swarming with suspects — suspects who I’m told were cheering on the roof when they saw the planes slam into the Trade Center. Police were called to the building by neighbors and found eight men celebrating, six of them tenants in the building.

The F.B.I. and other terrorist task force agencies arrived, and the older investigators on the task force recalled that they had been to this building before, eight years ago, when the first World Trade Center attack led them to Sheik Omar Abdel-Rahman, whose Jersey City mosque lies between the two buildings getting attention today. And the older investigators remember that the suspects that eventually got convicted for the first Trade Center case … lived in the building where these same eight men were celebrating the destruction that they saw from the roof. Calling this a hot address, the task force investigators ordered everyone detained.

ADDED: People are arguing falsely that the fact that only 8 suspects were apprehended contradicts the “swarm” claim. Read it again. An “investigator” told CBS about the “swarm.” The fact that a certain number were brought into custody does not change the fact that there was a “swarm.”  The obvious impression is that of the “swarm,” only eight were brought into custody. Eight people do not swarm on all those rooftops. They “gather.” Look at the video of the rooftop and picture “swarming.”

You want to get into semantics about how many people make up a swarm?

But that’s not all.

You have to add up all of the contemporaneous news reports. You are Donald Trump. You are taking in all the news during that awful week. You are told by the media that “swarms” of Muslims in a known terrorist’s neighborhood were seen on rooftops celebrating 9/11. Just two days earlier you have read this in the New York Post:

Here in New York, it was easy to get angry listening to Egyptians, Palestinians and the Arabs of nearby Paterson, N.J., celebrate as they received word of the murderous attack in New York and Washington. But Mayor Giuliani (who has been tireless and magnificent in this crisis) rightly warned New Yorker-ers that is would be wrong to take their anger our on the city’s Arab and Muslim residents. Attacks on Arab-Americans in Paterson or elsewhere are utterly indefensible.

From all of those news reports, it is perfectly reasonable and nothing close to lying to put together a picture of “thousands”.

If these celebrations did not occur, the only thing Trump did wrong was to believe the same media that is now calling him a liar — and doing so to cover up the truth about American Muslims celebrating 9/11 and their own covering up of that fact.