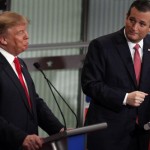 During on interview on “This Week” this morning, Donald Trump upped the ante in his contentious relationship with Ted Cruz, calling him a “nasty guy,” and suggesting that he himself could take Cruz to court over his eligibility to be president.

Trump later said that the issue of Cruz’s birth may prompt him to file a lawsuit himself.

“Well, it’s a good…maybe I’ll talk to them about it. I’d like to talk to Ted about it, see how he’d feel about it. ‘Cause you know, when I file suits, I file real suits.”

He did not clarify what he meant by suggesting he’d talk to Cruz about it before filing suit. Read more at ABC News.