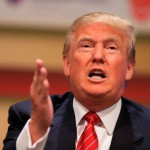 Trump raised the stakes against Clinton on CBS’ “Face the Nation” Sunday, insisting that as secretary of State in President Obama’s first term, Clinton’s decisions led to unnecessary deaths on both sides in the Middle East.

“She has caused tremendous death with incompetent decisions,” Trump said. “She caused a lot of the problems that we have right now. You could say she caused the migration.

“The entire world has been upset. The entire world, it’s a different place. During Barack Obama and Hillary Clinton’s term, she’s done a horrible job.”

As he has said before, Trump argued that getting rid of Saddam Hussein in Iraq — a policy of Obama’s predecessor, George W. Bush — has led to the rise of the Islamic State. “All of this has led to tremendous death and destruction,” he said. “And she, for the most part, was in charge of it, along with Obama.”