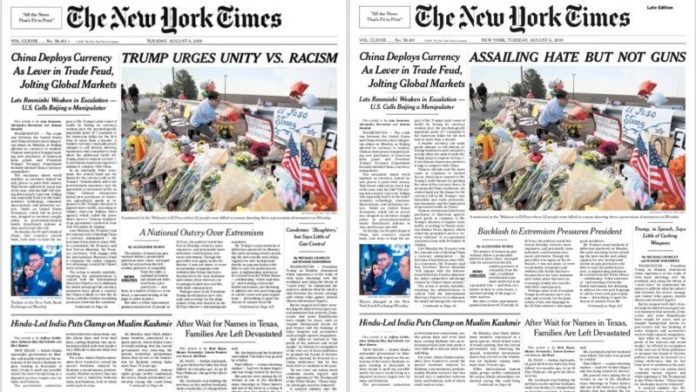 President Donald Trump on Wednesday fired off a pair of tweets aimed at the New York Times after the paper changed a widely derided front-page headline on his remarks about two mass shootings. Trump argued that the original wording was the “correct description” of his speech.

“‘Trump Urges Unity Vs. Racism,’ was the correct description in the first headline by the Failing New York Times, but it was quickly changed to, ‘Assailing Hate But Not Guns,’ after the Radical Left Democrats went absolutely CRAZY!” Trump tweeted. “Fake News – That’s what we’re up against…”

Trump added, “After 3 years, I almost got a good headline from the Times!”

The Times made the change after weathering intense backlash Monday night. A preview of Tuesday’s front page shared to social media sparked instant criticism from members of the public, journalists and politicians, including several 2020 Democratic presidential candidates, many of whom took issue with how the publication framed Trump’s comments on the weekend attacks in El Paso and Dayton, Ohio, that left at least 31 people dead and dozens injured. In the aftermath of the tragedies, major media outlets have faced scrutiny from all sides over how they confront Trump and his often inflammatory rhetoric.

About an hour after the headline went viral, the Times announced it had amended its wording.

“The headline was bad and has been changed for the second edition,” a spokesperson for the Times told The Washington Post in an email.

Later editions of the print paper feature the words, “ASSAILING HATE BUT NOT GUNS.” Subheads above the two stories about Trump’s speech were also changed.

The headline appeared to start gaining widespread attention around 9 p.m. when it was posted on Twitter by FiveThirtyEight’s Nate Silver, who wrote, “Not sure ‘TRUMP URGES UNITY VS. RACISM’ is how I would have framed the story.” By early Tuesday, Silver’s tweet had nearly 18,000 likes and more than 3,000 retweets.

Reading from a teleprompter on Monday, Trump spoke about setting “destructive partisanship aside” and using “one voice” to “condemn racism, bigotry, and white supremacy” – a message that diverged from the slew of divisive, and at times racist, statements the president has publicly directed at minorities ranging from immigrants to lawmakers. The president’s scripted address also contained no mention of new gun legislation, The Washington Post’s Dan Balz reported.

In one of two stories on the speech that appeared under the Times’s headline, reporters Michael Crowley and Maggie Haberman made similar observations, writing that it “seemed unlikely” Trump’s comments “would reposition him as a unifier when many Americans hold him responsible for inflaming racial division.”