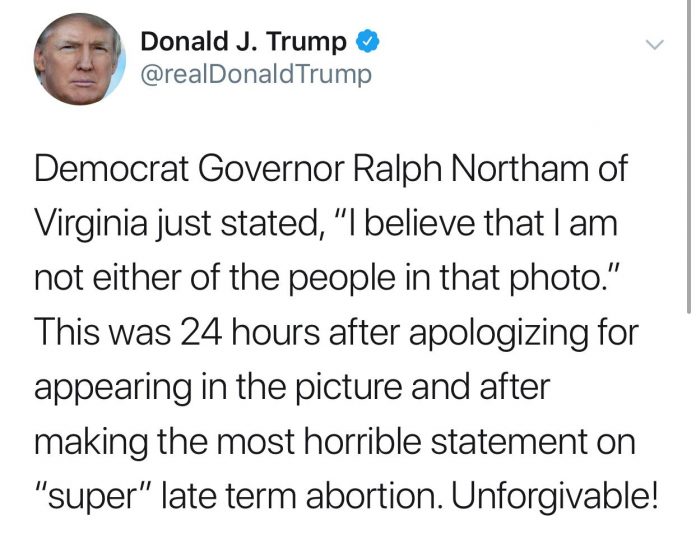 President Trump blasted Virginia Gov. Ralph Northam (D) on Saturday after Northam apologized at a press conference hours earlier for a photo that appeared in his medical school yearbook depicting two men, one dressed in Ku Klux Klan robes and the other in blackface.

“Democrat Governor Ralph Northam of Virginia just stated, ‘I believe that I am not either of the people in that photo.’ This was 24 hours after apologizing for appearing in the picture and after making the most horrible statement on ‘super’ late term abortion,” Trump tweeted, referring to comments the governor made earlier in the week on late-term abortion, adding: “Unforgivable!”

In a second tweet, the president remarked that Northam’s opponent in the 2017 Virginia gubernatorial race, Ed Gillespie (R), must be furious with his campaign staff for not finding the picture during the election.

“Ed Gillespie, who ran for Governor of the Great State of Virginia against Ralph Northam, must now be thinking Malpractice and Dereliction of Duty with regard to his Opposition Research Staff,” he wrote. “If they find that terrible picture before the election, [Gillespie] wins by 20 points!”