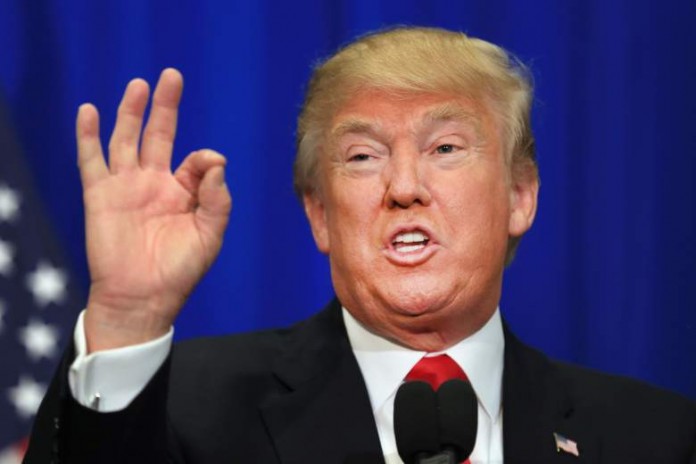 In a statement published on Facebook, Trump condemned Friday’s drive-by shooting attack which killed 48-year-old Rabbi Miki Mark, a father of 10. Mark was driving with his wife and children south of Hebron when a Palestinian opened fire on the family vehicle. Mark’s wife was seriously injured in the attack, with two of their children in serious to moderate condition. Over 20 bullet holes were found in the car.

“Yet another terrorist attack today in Israel — a father, shot at by a Palestinian terrorist, was killed while driving his car, and three of his children who were passengers were severely injured,” Trump said.

“I condemn this latest terrorist attack and call upon the Palestinian leadership to completely end this barbaric behavior. I also call upon President Obama to recognize and condemn each and every terrorist attack against our allies in Israel. This cannot become the ‘new normal.’ It has to stop!” Trump stated.

Earlier on Friday, Trump slammed the “heinous murder” of Hallel Ariel, who was butchered in her sleep by a knife-wielding Palestinian terrorist inside her family home in Kiryat Arba — located adjacent to Hebron — on Thursday. Following the attack, Palestinian Authority channels praised the terrorist as a “martyr,” with his own mother calling him a hero.

“The continuing incitement and preaching of hate by the Palestinian leadership, and the glorification of terror, must end immediately,” Trump said. “I call upon the leadership of the Palestinian Authority to condemn this murder and to take concrete steps to end this barbaric behavior.”

Trump’s statements on the two murders highlight his consistent focus on the responsibility of Palestinian leadership in inciting violence and terror against Israel. In June — in response to the deadly terror attack at the popular Tel Aviv Sarona Market — Trump cited rampant anti-Israel propaganda as a driving force behind hatred and violence in Palestinian society.

At the time, the presidential hopeful called on the world to “recognize the parallel horror of the culture of religious hatred that permeates many Palestinian quarters. From schools that indoctrinate toddlers to grow up to kill Israelis to the daily menu of hate that spews forth from various ‘news organizations,’ change is long overdue in the Palestinian territories.”