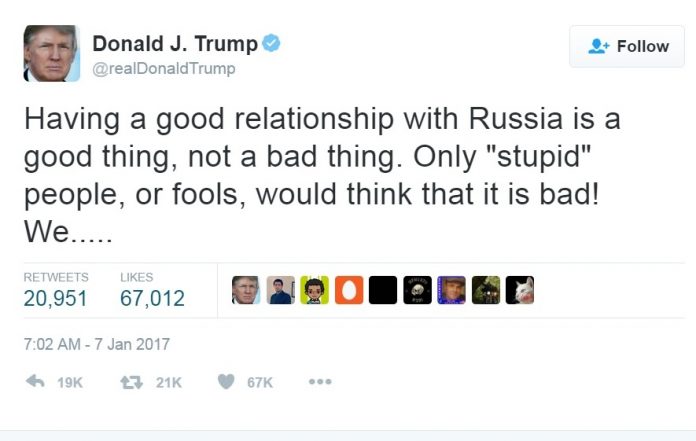 Donald Trump today made it his mission to let all of Twitter know that he will improve ties with Russia, the Daily Beast reports.

A day after a report was made public concluding that Russian President Vladimir Putin personally ordered a campaign to interfere in the U.S. election, Trump promised that Russia and the U.S. would “work together” on global issues. He went on to lash out at critics who have expressed concerns over Russia, saying “only ‘stupid’ people, or fools, would think that it is bad” to have a good relationship with Russia. “When I am President, Russia will respect us far more than they do now,” he said. He also continued his tirade against the intelligence community’s conclusions on Russian hacking, accusing Democrats of simply being sore losers. “Only reason the hacking of the poorly defended DNC is discussed is that the loss by the Dems was so big that they are totally embarrassed!”