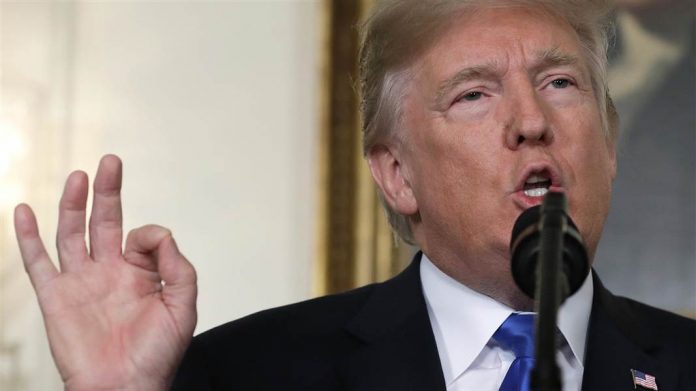 President Donald Trump suggested Wednesday that the Justice Department investigate the Democratic mayor of Oakland, California, for her role in tipping off undocumented immigrants about an impending federal enforcement raid in February.

Trump said Mayor Libby Schaaf’s decision to inform residents of Oakland ahead of the Immigration and Customs Enforcement action amounted to “obstruction of justice” because many of those who were targeted fled the area before federal agents arrived.

“They all fled, or most of them fled. The whole operation took a long time to put together,” he said during an immigration roundtable at the White House with administration aides and political leaders and law enforcement officials from California.

“You talk about obstruction of justice – I would recommend that you look into obstruction of justice for the mayor of Oakland, California, Jeff,” Trump continued, aiming his remarks at Attorney General Jeff Sessions, who was seated at the table. “She advises thousand people… ‘Get out of here, the law enforcement’s coming.’ And you worked on that long and hard and you got there and there were very few people there.”

Trump also said: “Perhaps the Department of Justice can look into that, with respect to the mayor, because it’s a big deal out there, and a lot of people are very angry about what happened.”

Sessions has previously criticized Schaaf, stating that her warning prevented authorities from making 800 arrests. That claim was disputed by an ICE spokesperson, who said it was false and resigned in protest. In a March speech in California, Sessions directly blasted Schaaf.

“How dare you?” he said then. “How dare you needlessly endanger the lives of our law enforcement officers to promote a radical open-borders agenda?”

Schaaf, whose warning to the community came in the form of a tweet, has defended her action, saying the warning was within the law. “I was sharing information in a way that was legal and was not obstructing justice,” she said a few days after the incident, “and it was an opportunity to ensure that people were aware of their rights.”

Trump’s move to encourage the nation’s top law enforcement officer to investigate a Democratic politician was viewed by some as an attempt to weaponize the Justice Department against his political opponents, with critics calling it an abuse of power.

Trump has sought to crack down on illegal immigration, a key campaign pledge, but the number of immigrants crossing the border illegally has spiked in recent months, angering the president ahead of the midterm elections this fall. The president reportedly berated his homeland security secretary, Kirstjen Nielsen, over the issue, prompting her to consider resigning, according to news reports.

His roundtable on Wednesday focused on California’s status as a “sanctuary state” that allows local officials to withhold some information about undocumented immigrants from federal enforcement agencies.

Trump’s comments also might be a reflection of his frustration with the ongoing Russia probe led by Special Counsel Robert Mueller, which has included allegations that the president sought to obstruct justice.