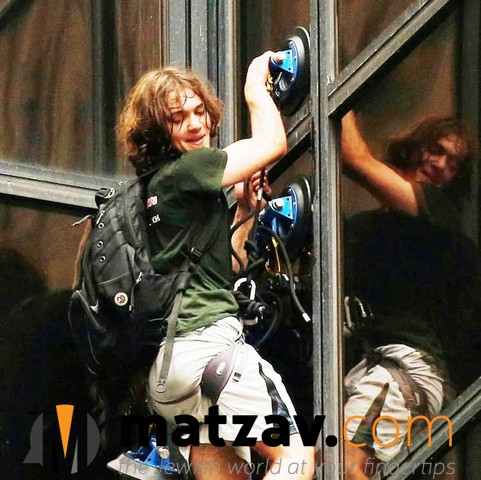 The Spiderman-like character who caused a spectacle yesterday by scaling the side of Trump Tower in an effort to meet the Republican presidential candidate has been identified by police sources as Stephen Rogata, reports Heavy.com.

The climber’s identity was difficult to unravel because he had changed his name to Rogata and had an ID in that name but was previously Michael Joseph Ryan of Great Falls, Virginia.

Members of the New York Police Department’s Emergency Services Unit eventually removed a window and pulled the climber, 19, into the 21st floor of building as he tried to climb past them, ending the high-altitude standoff shortly after 6:30 p.m.

The daredevil, who told police his name was “Steve from Virginia,” used suction cups to slowly scale the Manhattan tower owned by the presidential candidate, causing a commotion on the streets and social media as police initially tried in vain to get him to stop,Heavy.com adds.

Police said at a press conference that the climber came to New York City from Virginia on Tuesday and was staying at a local hotel.

Rogata was charged with criminal trespass and reckless endangerment and taken to Bellevue Hospital for a psychiatric evaluation.

In a video posted the day before the climb, Rogata said he climbed Trump’s tower to get his attention. In the video, Rogata, wearing a hoodie, and seen in profile, says, “Hello Mr. Trump, Excuse my manner of appearance. I just don’t know how many people will watch this. I would rather not be recognizable. I am an independent researcher seeking a private audience with you to discuss an important matter. I guarantee it is in your interest to honor this request. Believe me, if my purpose was not significant, I would not risk my life pursuing it. The reason I climbed your tower was to get your attention. If I had sought this by conventional means, I would be much less likely to have success because you are a busy man with many responsibilities. I’ll get my contact information to your campaign so that if you are interested you can respond. As for anyone else who is watching, please help this video go viral so it gets to Mr. Trump and be sure to vote for Mr. Trump in the 2016 election.”

Michael Cohen, an attorney and executive vice president for the Trump Organization, issued a statement: “This man performed a ridiculous and dangerous stunt. There’s damage to the building and he caused the unnecessary deployment of New York’s finest to protect his safety and the safety of everyone in the building. He’s caused the shutdown of traffic on Fifth Avenue. I’m 100 percent certain the NYPD had better things to do. If Mr. Trump were here he’d be thanking law enforcement for the job they’re doing.”