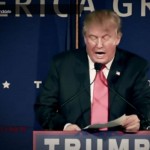 Donald Trump’s rhetoric about Muslims and Syrian refugees is at the center of a new terrorist recruitment video put out by the Somalian jihadist group al Shabaab, reports Katie Zavadski for the Daily Beast.

Trump’s guest appearance is preceded by an old clip of U.S.-born al Qaeda cleric Anwar al Awlaki warning that the West will become the land of “religious discrimination and concentration camps.” It then cuts to Trump reading his promise to stop Muslim immigration aloud at a campaign rally. “And so remember this, so listen: Donald J. Trump is calling for a total and complete shutdown of Muslims entering the United States until our country’s representatives can figure out what the [expletive] is going on,” Trump says to a cheering grown.

The video cuts again to Awlaki, who was killed by a U.S. drone strike in Yemen in 2011. “The West will eventually turn against its Muslim citizens,” he warns.

Trump comes on screen after clips of fatal police shootings of black men overlayed with a Malcolm X speech on racism, and a description of racial inequality in the U.S. “With racism deeply entrenched in every part of the society, the highly celebrated notion of the American dream has become for many African Americans just that: A dream that will never materialize,” the narrator says. The alternative to this system, he says, is Islam.

The video then cuts to a section purporting to track the numbers of Muslims investigated, arrested, surveilled, or deported by U.S. authorities. “Under the pretext of homeland security, the United States is waging an aggressive war against the American Muslims,” the narrator says, adding that this has left some with no choice but to “flee the oppressive Western atmosphere for the lands of Islam.”

Somalia’s al Shabaab has drawn American men as fighters for the better part of a decade. The terrorist group has traditionally been aligned with al Qaeda, but some factions have recently defected to join ISIS.