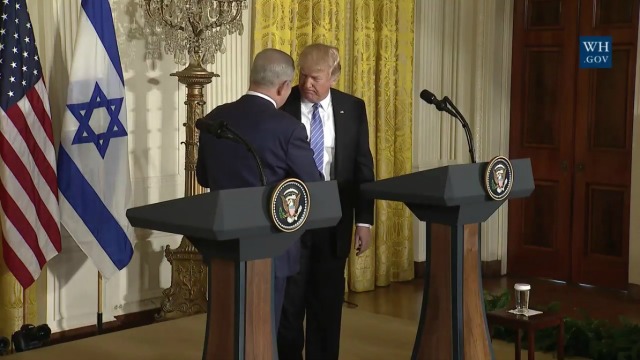 The Palestinians “have to get rid of some of the hate they are taught from a very young age” before a peace deal with Israel can be reached, US President Donald Trump said on Wednesday.

“They’re taught tremendous hate,” Trump stated at a joint White House press conference with visiting Israeli Prime Minister Benjamin Netanyahu. “I’ve seen what they’re taught…it starts at a very young age and it starts in the schoolroom. They have to acknowledge Israel, they’re going to have to do that. There is no way a deal could be made if they’re not ready to acknowledge a very, very great and important country.”

Earlier at the East Room event, Trump turned to Netanyahu and said, “As far as settlements, I’d like to see you hold back on settlements for a little bit. We’ll work something out. But I’d like to see a deal be made. I think a deal will be made…Bibi and I have known each other a long time — s smart man, a great negotiator. And I think we’re going to make a deal. It might be a bigger and better deal than people in this room even understand. That’s a possibility. So let’s see what we do.”

Netanyahu then chimed in tersely, “Let’s try,” to which Trump replied, “That doesn’t sound too optimistic.”

Both Trump and Netanyahu touted the idea of rethinking the traditional paradigm of Israeli-Palestinian peacemaking.

“We can seize a historic opportunity,” Netanyahu said. “For the first time in my lifetime, and the first time in the life of my country, Arab countries do not see Israel as an enemy, but increasingly, as an ally…This change in our region creates an unprecedented opportunity to strengthen security and advance peace.”

“I believe that the great opportunity for peace comes from a regional approach, from involving our newfound Arab partners in pursuit of a broader peace and peace with the Palestinians,” the prime minister went on to say.

On the same matter, Trump stated, “We have been discussing that and it is something that is very different, hasn’t been discussed before. And it’s actually a much bigger deal, a much more important deal, in the sense that it would take in many, many countries and would cover a very large territory…I think it’s a terrific thing. And I think we have some pretty good cooperation from people that in the past who would never, ever, have even talked about doing this.”

The two prerequisites for peace, Netanyahu stated — Palestinian recognition of the Jewish state and Israel maintaining security control over all land west of the Jordan River.

The US-Israel alliance, Netanyahu said, is “based on a deep bond of common values and common interests. And increasingly, those values and interests are under attack by one malevolent force — radical Islamic terror. Mr. President, you’ve shown great clarity and courage in confronting this challenge head on. You call for confronting Iran’s terrorist regime…preventing Iran from realizing this terrible deal [the July 2015 Joint Comprehensive Plan of Action] into a nuclear arsenal. And you have said that the United States is committed to preventing Iran from getting nuclear weapons. You call for the defeat of ISIS. Under your leadership, I believe we can reverse the rising tide of radical Islam, and in this great task, as in so many others, Israel stands with you, and I stand with you.”