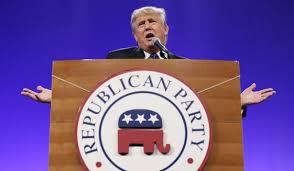 Donald Trump has demolished just about every pillar of Republican philosophy, leaving the party to grapple with an identity crisis deeper than anything it has seen in half a century.

The GOP has chosen as its 2016 standard-bearer a candidate who has flouted a litany of its once-sacred conservative principles. Trump is disdainful of free-trade agreements, leery of foreign intervention, less than strident on social issues and a champion of protecting entitlements.

Trump has also shattered Republican efforts to appeal to minorities and women by taking extreme positions on building a wall along the Southern border and barring Muslims from entering the country – and offending women with a series of insulting comments.

And Trump has risen as the institutional powers of the party, from its congressional leadership to its thought leaders at think tanks and in the media, have seen their support and stature diminished and fragmented during the Obama era, leaving vulnerable both the party and the right overall.

“As this develops, he’ll help shape – at least for this year, and maybe for a long time after that – what it means to be a Republican,” said former New Jersey governor Thomas H. Kean (R).

“There has been so much anger and fear and turmoil this cycle that I don’t think we’ve fully digested the philosophical bent of Trump,” added Al Cardenas, former head of both the American Conservative Union and the Florida GOP. “There have been votes of discontent and emotion, but little consideration on the bandwidth of his candidacy and what it really means for who we are.”

What Trump understands and channels is the frustration of the GOP’s grass roots, whose fury is directed as much at traditional Republicans as anywhere else.

“I don’t believe Trump has any beliefs. What I sense happened is he saw an arbitrage opportunity, a huge disconnect of the rank and file from the elite on immigration and trade, and he just exploited that,” said Reihan Salam, a conservative intellectual and author. “He walked in, took advantage and recognized there is a constituency.”

Trump discerned that early, even as the GOP establishment was sifting through the rubble of 2012, trying to figure out why it had lost the popular vote in five out of the past six presidential elections.

Their prescription for victory was to soften their party’s image by appealing to young people, Hispanics and women.

Trump’s was the opposite.

Just six days after GOP nominee Mitt Romney conceded defeat to President Obama, Trump quietly filed an application with the U.S. Patent and Trademark Office for rights to the phrase that has become the signature line of his campaign: “MAKE AMERICA GREAT AGAIN.”

“This has never been a campaign about ideology or policy per se, or a 14-point policy plan,” said former Republican National Committee chairman Michael Steele. “It’s been about sending a message about Washington and the direction of the country.”

On the GOP debate stage, Trump stood out in a field of former and current governors and senators as the ultimate outsider. He railed against failing institutions, political correctness and a world that seemed to be pushing this country around.

Republicans have always put a premium on experience and had expected the cast of 2016 to be their most appealing in a generation. Instead, their voters turned to a figure with no government or military experience – the first nominee to lack either of those bona fides since Wendell Willkie in 1940 – and one who was best known to many Americans as the host of a reality television show.

Trump’s moment is the culmination of many trends that have taken hold on the right, especially since the end of George W. Bush’s presidency eight years ago.

The economic recession and financial bailouts angered and alienated the party base, sparking the rise of the tea party movement and its subsequent disappointment with the GOP-controlled Congress that it had been instrumental in bringing to Washington.

For his part, Trump is still adjusting to the sudden turn Tuesday that ended the nomination battle and put him as the de facto head of the Republicans. One of his first moves was to send a signal of reconciliation.

“I absolutely do not want to take over the party,” he said in an interview. “I want to work with the party.”

But the two leaders of the GOP on Capitol Hill – House Speaker Paul D. Ryan, Wisconsin, and Senate Majority Leader Mitch McConnell (Kentucky) – barely know Trump and have had only occasional phone calls with him in recent months. On policy, Trump can appear to be worlds apart, such as with his opposition to the sweeping budget overhaul and trade pacts that have been the cornerstone of Ryan’s national career.

Unlike McConnell, who comes out of the trench warfare of partisan Kentucky politics, and Ryan, who is a scion of the supply-side conservative movement, Trump is a product of the New York real estate business and the city’s tabloid culture, a political agitator lacking an ideological project.

The main thing many Republican leaders want right now is reassurance that, despite polls to the contrary, Trump is not leading the GOP to a massive defeat in the fall that could wipe out candidates all the way down the ballot and possibly cost them their Senate majority.

“The question is whether Trump can put together a majority coalition with unfavorable ratings in the mid-60s,” said veteran GOP pollster David Winston. “Granted, Clinton is in the mid-50s with her ratings, but he has to define a plan to get his unfavorable numbers down. If he can’t, it’ll be a big problem.”

And they are anxious to see whether he can grow into a figure whom voters beyond the Republican base can see as a credible occupant of the Oval Office.

“We’re going to have to wait and see if there is an evolution of the candidate,” Cardenas said. “The whole thing is a work in progress.”

The most optimistic among Republicans hope that Trump has the capacity to bring in new voters and expand the party’s reach. But they realize that could ultimately come at the cost of their identity and the coherence of their worldview.

“It’s about to grow into a much bigger coalition than it has been in a long time,” said former House speaker Newt Gingrich, whose name is being mentioned as a possible running mate for Trump. “And that will inevitably involve a lot of stress.”