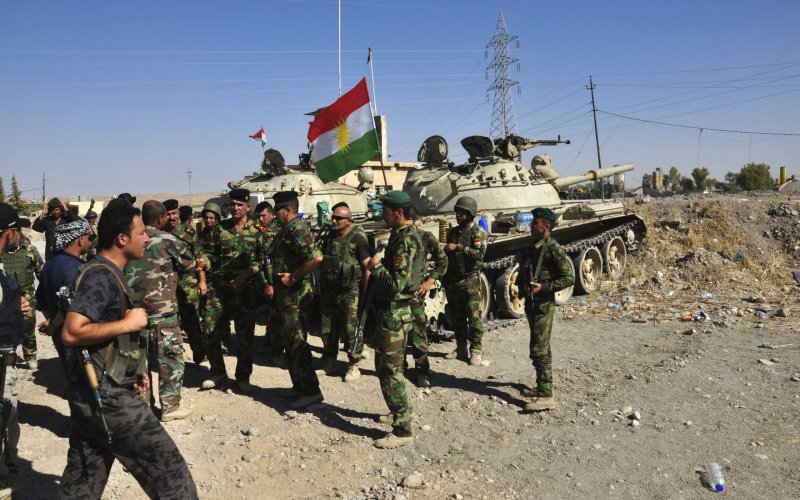 Turkey rebuffed U.S. calls for a cease-fire in northeastern Syria as it pressed ahead Wednesday with an offensive targeting Syrian Kurdish forces and demanded that the fighters lay down their arms.

President Recep Tayyip Erdogan said Wednesday that Kurdish fighters should “drop their weapons” and withdraw from designated border areas. Turkey launched the offensive last week to rout Kurdish-led forces it says pose a threat to national security along the Turkish frontier, where it hopes to establish a buffer zone.

Erdogan’s apparent rejection of U.S. mediation came as Vice President Mike Pence and Secretary of State Mike Pompeo prepared to fly to Turkey to persuade Ankara to end a campaign that has become a political liability for the Trump administration and a potential threat to U.S. troops.

President Donald Trump ordered a final withdrawal of U.S. forces from northeastern Syria earlier this week, a move that critics said would undermine the ability of the vice president and secretary of state to end the conflict.

Trump also announced sanctions on senior Turkish officials, including the defense minister, over what the White House said were “destabilizing actions” in northeastern Syria.

Erdogan “needs to stop the incursion into Syria,” Pompeo said in an interview Wednesday on Fox Business Network.

“We need a cease-fire,” he said. “At which point we can begin to put this all back together again.”

The Turkish operation, which includes Syrian rebels, has upended alliances and reignited tensions in a particularly volatile corner of Syria, where U.S. troops for years partnered with Kurdish-led fighters to battle the Islamic State.

As the U.S. military continued its withdrawal Wednesday, it vacated Raqqa, the former de facto capital of the Islamic State, as well as Tabqa and a major headquarters at the Lafarge Cement Factory in Jalabiya, Army Col. Myles Caggins, a U.S. military spokesman, said in a tweet.

At the cement factory, after American troops had left, U.S. forces used F-15 jets to carry out airstrikes on parts of the headquarters to “destroy an ammunition cache and reduce the facility’s military usefulness,” Caggins wrote.

In addition to the ammunition, the strikes targeted a small compound that was ringed with blast walls and included living quarters and diesel power generators, said a U.S. military official, speaking on the condition of anonymity because of the sensitivity of the operation.

The strikes came one day after Russian forces took over a different outpost near Manbij after U.S. forces vacated it. A journalist embedded with the Russians posted photos and videos of the base, showing that while the Americans appeared to have taken their weapons and armored vehicles with them, they had left behind construction equipment, electronics, tents and food.

The fighting has undermined security around camps and detention centers holding Islamic State prisoners and their families, allowing some to escape amid the chaos, aid workers and diplomats said.

An Iraqi intelligence official said the U.S.-led coalition fighting the Islamic State had transferred about 50 prisoners with suspected ties to the militant group from Syria to Iraq over the past week. The official spoke on the condition of anonymity because he was not authorized to speak publicly on the matter.

Turkish officials view Syrian Kurdish forces as terrorists because of their links to the Kurdistan Workers’ Party, or PKK, which has waged a decades-long war for autonomy in Turkey.

Erdogan said Turkey would “never declare a cease-fire” and vowed to forge ahead with plans to enforce a buffer zone as deep as 20 miles into Syrian territory. The swath of territory would stretch more than 280 miles from the northern city of Manbij to the Syrian border with Iraq.

“Nobody can stop us,” Erdogan said in a speech to parliament Wednesday.

The abrupt pullout of U.S. troops prompted Syrian Kurdish leaders to strike a deal with President Bashar Assad and his main backer, Russia, to help forestall the Turkish campaign.

International aid agencies have suspended operations, and the United Nations warned that at least 160,000 people had been displaced.

On Wednesday, Syrian government troops entered the border town of Kobane, Syria’s state news agency reported. It was an advance freighted with symbolism: Four years ago, the Islamic State militant group was handed its first major battlefield defeat in Kobane, by Kurdish fighters backed by U.S. air power and supplied with American weapons.