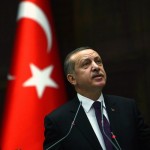 Turkish President Recep Tayyip Erdogan has called for snap elections on Nov. 1 after the collapse of talks to form a governing coalition.

“We will take our country to elections,” Erdogan told reporters Friday. “God willing, Turkey will have the elections again on November 1.”

Erdogan’s Islamist AKP party failed to win a majority in June’s parliamentary elections for the first time since it came to power 12 years ago, largely due to the surprisingly strong electoral showing of the pro-Kurdish HDP party. AKP failed to form coalition agreement with two nationalist opposition parties, and Erdogan refused to allow the Republican People’s Party (CHP), which came in second in the June elections, to hold their own coalition talks.

The political uncertainty comes amid increasing unease over the neighboring Syrian civil war. Recently, Turkey permitted U.S. coalition fighter jets to use a Turkish airbase to target the Islamic State terror group in Syria. At the same time, Turkey has launched its own airstrikes against Islamic State targets and has bombed Kurdish Workers’ Party (PKK) camps in northern Iraq.

Yet Turkey has faced domestic repercussions, including a recent suicide bombing in the town of Suruc along the Syrian border that killed 32 civilians, in addition to some 50 Turkish soldiers and police officers being killed in attacks blamed on the PKK.

Erdogan and his party are known for their anti-Israel and anti-Semitic rhetoric.