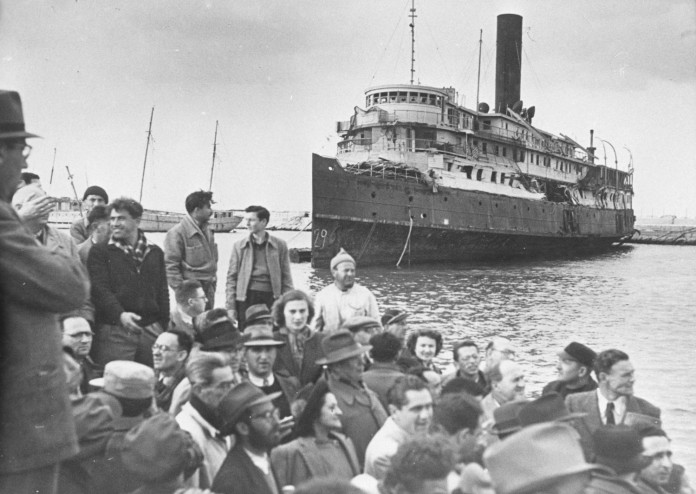 Seventy-six years later, a man born on a Haganah refugee ship carrying 728 Jewish refugees fleeing from Nazi-occupied areas of Europe has finally met the second baby born on the ship.

Yehuda Oestreicher has always known that he was born 76 years ago aboard the Hilda. His mother was pregnant when she boarded the ship, but hid her belly underneath a coat out of fear she would not be allowed on board if her secret was discovered. It took months before the ship was able to sail, and Oestreicher was born three months later in the captain’s cabin.

Over the years, he heard from his parents and from others that he was not the only baby born on the ship.

“They told me that a girl was born two weeks before me, and they decided to name her Hilda, after the ship,” Oestreicher said. “This baby girl was always a mystery to me and I have wanted to find her for years, but I didn’t know how.”

An Israel Hayom article published for Holocaust Remembrance Day last year led to hundreds of calls from people asking to review their recognition as Holocaust survivors, including from Oestreicher, who lives in the central Israeli moshav of Herev Le’et, and from a woman named Bracha Ronen from Kibbutz Lahav in the south.

“When Yehuda came to us and shared the story of his birth on the ship Hilda, I was sure that I had already heard the story in the first person,” said attorney Noa Shine of the Aviv for Holocaust Survivors organization. “But then I realized that this was actually because a woman had approached the organization over the same issue. I immediately put the puzzle together, and I understood that they had to meet each other.”

That finally happened on Sunday. Three-quarters of a century after coming into the world on the same ship, Oestreicher and Ronen met for the first time. They were both excited and quick to find the humor in the situation.

“My mother turned the captain’s cabin into a delivery room, and then Yehuda’s mother continued the tradition,” Ronen said, laughing. “The captain made an improvised birth certificate for my parents, and that is where it is written that my middle name is Hilda. That’s why Yehuda knows me [by that name].”

“My parents told me about another baby born there, and over the course of my life I have asked myself where he is several times,” she said.

Oestreicher added, “Testimonies from the ship say that the conditions there were terrible. There was a shortage of food, diseases, and each person had just 65 square centimeters (10 square inches) in which to live….But the testimonies that I have managed to gather over the years tell of the great happiness of having two babies born on the boat. Bracha and I symbolized continuity, despite the hardship. This gave people peace and hope. Many people were very happy and wanted to help. My parents said they gave us bedsheets so we could have diapers.”

The two promised that from now on, they would meet more frequently than once every 76 years.