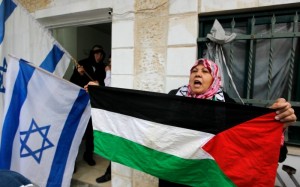 The Obama administration never fails to disappoint when it comes to its treatment of Israel.

Eight Israelis have been killed and dozens wounded over the past two weeks, yet the Obama administration continues to equate Palestinian terror with Israel defending itself.

Yet, now the Obama administration has suddenly found a voice.

The U.S. State Department has called the stabbing of four Arab Israeli men by a Jewish man an “act of terrorism.”

Israeli Prime Minister Bibi Netanhayu also condemned the incident – which is suspected to be a revenge attack – as unacceptable violence, but the State Department’s labeling came out distinctly harsher.

Amid rising violence between Palestinians and Israelis, a State Department spokesperson said Wednesday that “individuals on both sides of this divide have proven capable of, and in our view, guilty of acts of terrorism” and that the agency had seen reports of “excessive use of violence” by the Israeli government. (Read more at Haaretz.)

This administration’s treatment of Israel can make you pull your hair out.