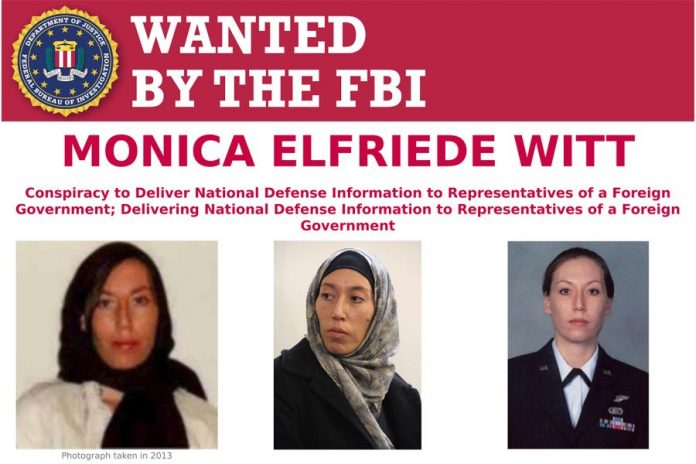 A former Air Force intelligence specialist who defected to Iran has been charged with conspiring to provide U.S. defense information to representatives of that country’s government, including the code name and mission of a highly classified program, the Justice Department announced Wednesday.

Monica Elfriede Witt, 39, a former counterintelligence officer, is accused of revealing the Defense Department program, the details of which are unclear, as well as helping Iranian intelligence services direct hacking and identity theft attempts at her military co-workers. She defected to Iran in 2013 and is believed to be there now.

“It is a sad day for America when one of its citizens betrays our country,” said Assistant Attorney General John Demers at a briefing to make public the charges.

The announcement of the case comes just as Secretary of State Mike Pompeo and Vice President Mike Pence prepared to welcome representatives from about 60 countries for in Poland that was originally billed as a conference to pressure Iran on its missile testing and terrorism. The event, though, has received a tepid response abroad, as some objected to the its anti-Iran focus. Law enforcement officials insisted there was no connection between the timing of the charges and the conference.

Jay Tabb, the FBI’s executive assistant director for national security, said investigators believe Witt shared information that “could cause serious damage to national security,” though he declined to provide specific details of the operations she allegedly disclosed.

Witt, who served in the Air Force from August 1997 to March 2008 and worked from 2008 to 2010 as a government contractor on classified projects, had access to sensitive government materials, officials said.

According to the indictment, she had access secret and top secret national defense information, including the names of intelligence sources and clandestine agents, and had been deployed between 1999 and 2003 overseas to collect electronic intelligence.

The Justice Department alleged she shared with Iran packages of information about her former colleagues so they could be targeted, as well as the code name and mission of a Defense Department Special Access Program, which was highly classified.

Tabb said investigators believe Witt’s motive was “ideological,” and the indictment against her alleges that, before she defected, she appeared in videos that she knew would be broadcast by Iranian media outlets and “made statements that were critical of the U.S. government.”

In 2012, after Witt traveled to Iran for a conference, the FBI warned her that she could be a targeted for recruitment by that country’s government, and Witt told the bureau she would refuse to provide information about her military work, according to the indictment. The next year, she went to another Iranian conference and soon arranged to defect, according to the indictment.

Asked if the bureau should have done more after the initial warning, Tabb said, “I don’t think so.”

“We followed a procedure that we do, known as a defensive briefing. We went to Witt and we told her that she might be targeted by intelligence officers in travel to Iran. She chose not to heed our warning,” he said.