The latest calculation of the National Debt as posted by the Treasury Department has – at least numerically – exceeded the statutory Debt Limit approved by Congress last February as part of the Recovery Act stimulus bill.The ceiling was set at $12.104 trillion dollars. The latest posting by Treasury shows the National Debt at nearly $12.135 trillion.

A senior Treasury official told CBS News that the department has some “extraordinary accounting tools” it can use to give the government breathing room in the range of $150-billion when the Debt exceeds the Debt Ceiling.

Were it not for those “tools,” the U.S. Government would not have the statutory authority to borrow any more money. It might block issuance of Social Security checks and require a shutdown of some parts of the federal government.

Pending in Congress is a measure to increase the Debt Limit by $290 billion, which amounts to six more weeks of routine borrowing for the federal government. (The House just passed the increase, though the Senate has yet to act. It is expected to approve the measure.)

Republicans and conservative Democrats blocked moves by House leaders to pass a $1.8 trillion dollar increase in the Debt Limit so the Democratic majority would not have to face the embarrassment of raising the Debt Limit yet again before next November’s midterm elections.

The Debt Limit has been raised about a hundred times since 1940, when it was $49 billion – about five days worth of federal spending now.

The White House projects a record $1.5 trillion dollars deficit this year alone, and a 5-year deficit total of $4.97 trillion.

The Debt figure goes up and down on a daily basis based on government borrowing and revenue. Technically, not all of the National Debt is subject to the Debt Limit – a small percentage is exempt. 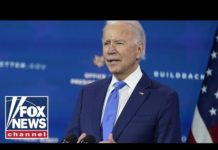