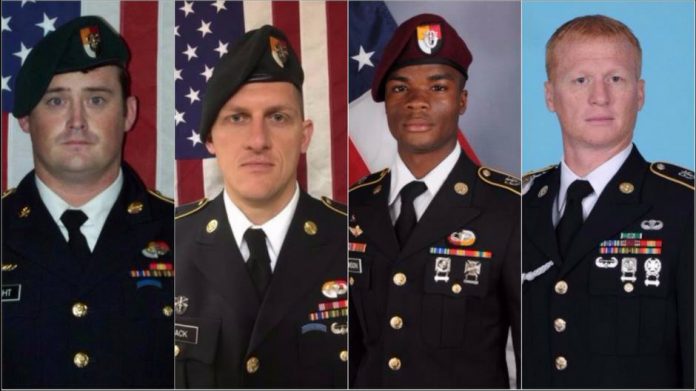 The body of Sgt. La David Johnson, one of four U.S. soldiers killed in an ambush by Islamist militants in Niger last month, was found with his arms tied and a gaping wound at the back of his head, according to two villagers, suggesting that he may have been captured and then executed.

Adamou Boubacar, a 23-year-old farmer and trader, said some children tending cattle found the remains of the soldier Oct. 6, two days after the attack outside the remote Niger village of Tongo Tongo, which also left five Nigerien soldiers dead. The kids notified him.

When Boubacar went to the location, a bushy area roughly a mile from the ambush site, he saw Johnson’s body lying face down, he said. The back of his head had been smashed by something, possibly a bullet, said Boubacar. The soldier’s wrists were bound with rope, he said, raising the possibility that the militants – whom the Pentagon suspects were affiliated with the Islamic State – seized Johnson during the firefight and held him captive.

The villagers’ accounts come as the Niger operation is under intense scrutiny in the United States, with lawmakers expressing concern that they have received insufficient or conflicting information about what happened. The Pentagon is conducting an investigation into the attack in Niger, where the U.S. military is helping the Nigerien government confront a threat by militants associated with the Islamic State and al-Qaida.

Boubacar, a resident of Tongo Tongo, said in a phone interview that he informed the village’s chief after seeing Johnson’s body. “His two arms were tied behind his back,” he said. The chief called Nigerien military forces, who dispatched troops to retrieve Johnson’s remains.

The village chief of Tongo Tongo, Mounkaila Alassane, confirmed the account in a separate phone interview.

“The back of his head was a mess, as if they had hit him with something hard, like a hammer,” recalled Alassane, who said he also saw the body. “They took his shoes. He was wearing only socks.”

A U.S. military official with knowledge of the investigation into the ambush acknowledged that Johnson’s body appeared viciously battered but cautioned against reaching any conclusions until the probe is completed.

“When the Americans received Johnson, his hands were not tied,” said the U.S. official, who spoke on the condition of anonymity to discuss a sensitive matter.

The two Tongo Tongo villagers said they also saw the bodies of the three other American soldiers – Staff Sgts. Bryan Black, Jeremiah Johnson and Dustin Wright – who U.S. officials say were killed in action. One was slumped inside the team’s pickup truck, they said. The bodies of the other two were on the ground, one clutching a walkie-talkie, they said.

They were wearing T-shirts and boxer shorts, the two men said. It was unclear whether the militants had stripped off their uniforms.

The accounts could help explain why it to took two days to find Johnson’s body, while the other men’s remains were retrieved several hours after the battle. Johnson’s widow has said that the U.S. military advised her not to view his corpse, a suggestion often made when remains are badly disfigured.

The widow, Myeshia Johnson, has emerged as a prominent figure in the uproar over the Niger attack, accusing President Donald Trump of acting cavalierly about her husband in a condolence call, a charge the White House has denied. She also has complained of receiving little information about what happened to her spouse.

FBI and U.S. military investigators have arrived in this impoverished West African nation to try to determine what happened in the Oct. 4 assault on an 11-member Army Special Forces team and 30 Nigerien troops. Among the questions they are addressing: Were there intelligence lapses? Did the unit have adequate equipment? Was the extremist threat properly assessed before the mission began?

The case has received enormous attention in the United States because of conflicting accounts over whether the soldiers were on a low-risk patrol or had changed plans and set out in pursuit of Islamist insurgents. Questions also have been raised about why the team was lightly armed, given the danger in the area.

The Pentagon has said the soldiers were on a routine reconnaissance mission. Under U.S. military rules, American troops in Niger are not supposed to go on combat missions in the country, but they can “advise and assist” on missions with local forces where the chance of enemy contact is low.

A senior Nigerien security official said in an interview that the military unit made a critical error by deciding to spend the night along the volatile Mali-Niger border. That allowed the militants to surveil the unit and plan the ambush that occurred the following morning outside Tongo Tongo as the team was heading back to their base, he said.

In fact, the official said, the team was initially on a one-day mission.

“The schedule they did was to come back the first day, but they did not,” Mohamed Bazoum, Niger’s interior minister, said in the interview. “They stayed there. And because they stayed there for all the night, the jihadists were able to target them” and follow them.

In an Oct. 23 briefing with journalists, Gen. Joseph Dunford Jr., the chairman of the Joint Chiefs of Staff, acknowledged that the unit stayed away from its base overnight between Oct. 3 and 4. But he said, “I think a probably more accurate description than ‘stayed overnight’ was they caught a couple of hours of sleep after the third and before they completed their mission on the fourth.”

He noted that previous joint patrols in the region had occurred without fatalities. There are roughly 800 U.S. troops in Niger, about a third of whom are Special Forces who take part in the “advise and assist” missions.

Col. Mark Cheadle, the top spokesman for the U.S. military’s Africa Command, said overnight stays by U.S. soldiers advising local forces in Niger were “mission-dependent.” He declined to respond to the interior minister’s charge or the villager’s recollections of Johnson’s remains, deferring to senior U.S. military officials who have said answers would be provided after a thorough investigation.

Bazoum oversees Niger’s internal security and works closely with both the Nigerien military and U.S. and other Western forces in the country. Normally, he said, such joint reconnaissance missions along the Niger-Mali border do not stretch over two days. Some news accounts, citing U.S. officials, have reported at least 29 joint missions in the past six months along the border.

When asked how many of those missions lasted two days, Cheadle said in an email that he could not provide a breakdown for security reasons, “but what I can say is that U.S. forces are prepared for overnight stays should the mission require it.”

The U.S. military official with knowledge of the ambush investigation said that it increasingly appears that the soldiers’ mission did change after they left their base in the capital, Niamey. The unit, the official said, apparently was rerouted to help another military team target a top Islamic State militant named Dadou, who was code-named “Naylor Road” by the U.S. military. But bad weather prevented the commandos from reaching the area. The unit continued to search for the militant and his fighters and eventually spent the night on the border, he said.

It was not clear why was a team mostly armed with rifles was ordered to assist an operation to nab a dangerous extremist.

Niger’s defense minister and Sgt. Abdou Kané, a Nigerien soldier who survived the ambush, told The Post last week that the mission was not purely to gather information but also to capture or kill enemy combatants inside Mali.

The U.S. official said the unit was never inside Mali but was operating along the border, essentially a line in the sand.

Bazoum, the interior minister, said the team’s miscalculations also included lingering too long in Tongo Tongo on their way back to base. The unit had stopped to replenish its water supplies on the morning of Oct. 4, and the U.S. soldiers spent time discussing medical care for the village kids, according to Kané and Alassane, the Tongo Tongo chief. The Nigerien soldiers cooked and ate breakfast.

“It was very easy for the jihadists to mobilize themselves and have a number of fighters more than the number that composed the mission,” Bazoum said.

“There was a big failure of intelligence by both the Nigeriens and the Americans,” he added. “The Americans are supposed to have more means, more information than us. But it is our country. Our intelligence service should know that this area was not so safe. They could have told them to hurry up, to not spend time staying in Tongo Tongo.”

Around 11:40 a.m. on Oct. 4, the team was ambushed outside the village by more than 50 militants with heavy weapons, according to Kané and Nigerien and U.S. officials. The soldiers began to run out of ammunition, said Bazoum.

Air support from French Puma helicopters and French jets took an hour or longer to arrive. When they did, the militants fled, said witnesses.

It was not clear exactly how Johnson’s body wound up in the field a mile away. Dunford has said Johnson became “separated” from his colleagues.

The day after Johnson’s remains were found, Alassane was arrested on charges of aiding the militants. He was released recently, said Bazoum, because of lack of evidence.