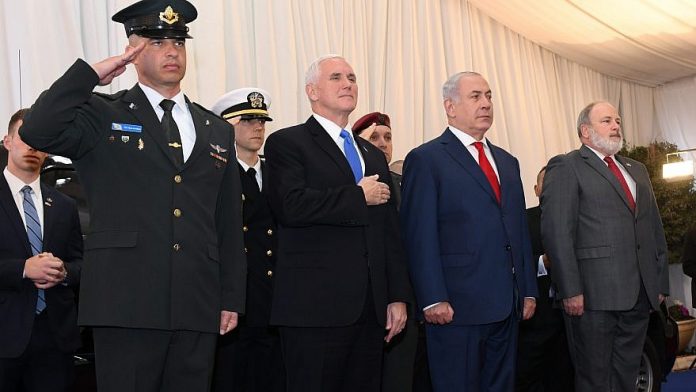 The United States will open its embassy in Yerushalayim next year, Vice President Mike Pence said Monday, accelerating plans after the Trump administration’s controversial decision to recognize the city as Israel’s capital.

Pence made the announcement to the Israeli parliament where he voiced wholehearted support for Israel, looking notably more at ease than during earlier meetings in Egypt and Jordan during his Middle East trip.

The decision to speed up the embassy move is likely to stir more denunciations across the Muslim world and further rankle Palestinians, who consider parts of Jerusalem as the capital of a possible future state.

“In the weeks ahead, our administration will advance its plan to open the U.S. Embassy in Jerusalem – and the embassy will open next year,” he said, and was met with a standing ovation.

When President Donald Trump announced the decision in December, U.S. officials indicated that it may take three or four years to move the embassy.

“By finally recognizing Jerusalem as Israel’s capital, the United States has chosen fact over fiction – and fact is the only true foundation for a just and lasting peace.”

But it was difficult Monday to see how it could stir progress between the two sides. Israeli Arab lawmakers staged a walk out at the beginning of Pence’s speech, resulting in a small scuffle, while Palestinian officials also snubbed Pence’s visit.

Instead of meeting with Pence, President Mahmoud Abbas flew to Brussels for talks with European foreign ministers to press for recognition of a Palestinian state. Abbas also hopes that Europe could take an expanded role in the peace process.

Hanan Ashrawi, one of the longtime Palestinian negotiators, said that billing Pence’s visit to the region as being in support of the peace process was “ridiculous.”

“The American side cannot talk about the peace process after it undermined it by declaring Jerusalem as the capital of Israel,” Ashrawi told the official Voice of Palestine radio station Monday.

Palestinian factions have called for a strike and demonstrations on Tuesday, and a few dozen demonstrators gathered in Bethlehem on Sunday night. Palestinians are already incensed with the earlier U.S. decision to cut aid to the U.N. agency providing assistance to Palestinian refugees.

After Trump formally recognized Jerusalem as Israel’s capital in December, the State Department began looking for a possible site on which to build an embassy to replace the existing one in Tel Aviv. Nearly every country that has diplomatic relations with Israel is based in Tel Aviv on the principle Jerusalem’s status should be decided in negotiations with the Palestinians, who also desire East Jerusalem as their capital.

Secretary of State Rex Tillerson had said construction could take several years, because of security requirements put into place after the 1998 bombings of U.S. embassies in Kenya and Tanzania. The buildings must be set 100 feet back from the street as protection against truck bombs, so many new missions are built far from the center of congested capitals.

“The secretary and the vice president are on the same page regarding the importance of security,” said Steve Goldstein, the undersecretary for public diplomacy and public affairs. “I wouldn’t expect any announcement to suggest security elements will be rushed.”

For weeks, the administration weighed whether to build an entirely new embassy, which could take as long as a decade and be very expensive, or whether to retrofit one of the consulates standing in Jerusalem, at least temporarily.

According to a source close to the administration who talked anonymously to discuss private deliberations, the discussion more recently focused on how quickly it would take to retrofit a consulate permanently so the embassy could be moved more quickly.

One faction believed the construction would take until next year to complete. Another, which included presidential adviser Jared Kushner and the U.S. ambassador to Israel, David Friedman, pushed for it to be done before the end of 2018.

Trump appeared to be comfortable with a timetable stretching into 2019 and as recently as Friday, a senior State Department official told reporters that designing and building a permanent embassy would be “a matter of years, and not weeks or months,” though the official acknowledged that an “interim” facility was being considered. The official said the decision was Tillerson’s to make, and he had not done so yet.

It was unclear why the time frame has changed so suddenly, and why the announcement was made by Pence, not Tillerson. In general, however, the White House has assumed responsibility for trying to resume peace talks between Israelis and Palestinians.

Aaron David Miller, a Middle East analyst who was a negotiator during both Republican and Democratic administrations, said the decision appears to have been made to satisfy Israel supporters for the time being because a permanent embassy cannot be built before Trump’s term ends.

“They’re trying to send the unmistakable signal this is not imminent,” he said. “But they want to demonstrate to the base they’re serious about it. They bought a year.”

Miller also said the decision to recognize Jerusalem as Israel’s capital has so angered Palestinians that it is difficult to move forward with a peace plan.

“In fact, it’s likely to convince them that even if they get into a process, they will have a unilateral act by the United States within a year that drives home the point that whatever happens in negotiations, Jerusalem is off the table.” he said.

Pence’s arrival in the country on Sunday night was notably low key, and he was met at the airport by only the minister of tourism. But the Israeli government said it gave Pence a full head-of-state welcome ceremony – complete with military band – at Prime Minister Benjamin Netanyahu’s office in Jerusalem later on.

“Mr. Vice President, I’ve had the privilege over the years of standing here with hundreds of world leaders and welcome them, all of them to Israel’s capital, Jerusalem,” Netanyahu said. “This is the first time that I stand here where both leaders can say those three words.”

He described the U.S.-Israel relationship as a “remarkable alliance” which has “never been stronger.”

Pence thanked Netanyahu for his “warm hospitality” and said he looked forward to speaking to him about the “opportunity for peace.”

“I’m here, standing with you, looking forward to speaking about our common interests in security and prosperity in Israel and the United States of America,” he said.

“But I also am here hopeful, hopeful that we are at the dawn of a new era of renewed discussions to achieve a peaceful resolution to the decades-long conflict that has affected this region,” he added.

Ayman Odeh, the leader of the Joint List, a collection of Arab-Israeli parties, who staged the walk out on Monday has said the vice president is dangerous to the region because of his strong ties to U.S. evangelicals and hard-line supporters of Israel.

It is those beliefs that have left Israelis divided on the nature of his visit and his unwavering support for Israel. Pence has visited Israel three times in the past.

In Israel Hayom, the newspaper owned by GOP casino magnate Sheldon Adelson and fiercely supportive of Netanyahu, commentator Dror Eydar wrote about the important role that evangelicals have come to play in the Trump administration’s policies on Israel and Jerusalem.

He captured the position of Israel’s right wing: that despite the ultimate goal of some evangelicals to see Jews convert to Christianity to fulfill their prophecy, they are among the few groups around the world that actually support Israel.

“This was also the secret to their tireless push to recognize Jerusalem as our capital and to relocate the U.S. embassy there. From their standpoint, Donald Trump’s election to the presidency was blessed by heaven when he publicly declared that he would move the embassy to Jerusalem in his term,” he wrote.