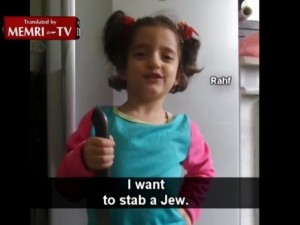 A Palestinian-Jordanian teacher has posted a video on Facebook of his tiny daughter clutching a knife and declaring, ‘I want to stab a Jew.’

In the video, discovered on Facebook and translated by the Middle East Media Research Institute (MEMRI), the little girl’s father asks, “Why do you want to stab the Jew?”

She answers, “Because they stole our land,” to her father’s warm support and approval. He then asks what she plans to stab the Jews with, and she answers, “With a knife.”

The videomaker was identified as Abdulhaleem Abuesha, who the Times of Israel says is a teacher in the Madaba refugee camp in Jordan. His Facebook account also includes a picture of a little boy, believed to be Abuesha’s son, also posing with a knife and smiling at the camera.