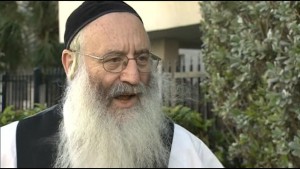 Rabbi Chaim Parnes was walking with thousands of dollars worth of diamonds in North Miami when he was roughed up and robbed. He spoke to 7News about the attack.

The rabbi, who is also a jeweler, traveled to South Florida on business when he was beaten with a pistol and robbed by several people behind a pawn shop, by 140th Street and West Dixie Highway, Tuesday afternoon.

Rabbi Parnes said he had the jewels in his pocket, and they reached for it. He was beaten and battered in the process. “They took it out,” he said. “I went through the back, I went out of the car. Three guys jumped out. One got me with a pistol, knock in the head.”

The rabbi is a diamond dealer from New York who was doing business in Aventura at a jewelry store. He stopped by a pawn shop in North Miami to buy diamonds.

Despite the circumstances, Rabbi Parnes said he feels lucky. “I’m alive. I’m healthy. I have my wife, my kids,” he said. “Sure God was with me that they didn’t shoot me.”

In surveillance video that was released by North Miami Police, you can see when the ambush took place. “I come here often, and I do business, but it’s terrible to happen,” Rabbi Parnes said. “It happen to a lot of people.”

“You see the victim exit his vehicle, and as he exits his vehicle, a vehicle slowly pulls up right behind him,” said North Miami Police officer Natalie Buissereth. “They get out, three subjects unknown that we need the public to identify, and rob him at gunpoint. They strike him over the head, they take his jewels, and they take off.”

Rabbi Parnes told 7News that he’s just grateful he’s alive to share his story. “Money comes back. Money is gonna come back, and if not, it meant that it shouldn’t have happened,” he said. “Life doesn’t come back.”

If you recognize any of the three men in the video, call Miami-Dade Crime Stoppers at 305-471-TIPS. Remember, you can always remain anonymous, and you may be eligible for a $1,000 reward. Source: WSVN.COM