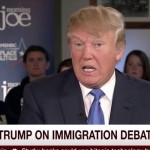 The morning after Tuesday evening’s Republican debate, candidate Donald Trump told MSNBC’s Morning Joe that, as president, he would like to create a “deportation force.”

Asked by host Mika Brzezinski how he would envision deporting millions of undocumented immigrants in the United States, Trump said: “You’re going to have a deportation force, and you’re going to do it humanely.”