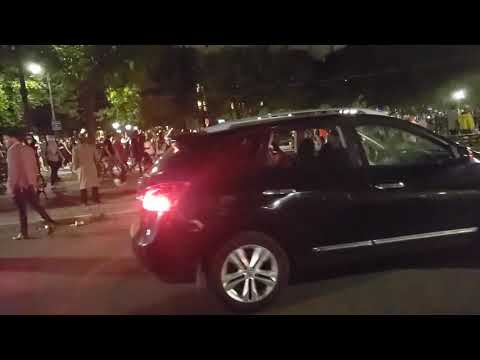 Thousands of people have taken to the streets of New York City protesting the death of a Minneapolis man in the hands of the police.

Update 10:08pm: The protest has turned up Utica, heading towards the 77th precinct.

Update 9:54pm: Outside 770 immediately before the protesters arrive.

Update 9:30pm:  Multiple arrests made in Manhattan for Looting. Calling for vehicles to transport them.

Update 9:20pm: Video near the Barclay Center from a little earlier.

Update 9:00pm: Multiple under arrest as stores have windows broken and are looted along Lexington and Broadway.

Update 8:37pm: Protesters in Manhattan have ripped down scaffolding.

Update 8:32pm: AT THIS TIME, THERE IS NO ACTIVE THREAT FOR THE CROWN HEIGHTS COMMUNITY. An old video from yesterday has been circulating showed an altercation at Empire Blvd and Flatbush Ave. There has been no protesters at that location today.

Update 8:30pm: 50th and 5th Ave, Bricks and fireworks being thrown at police.

Update 8:28pm: A group in Manhattan is looting a BMW, after looting the back of a tractor trailer.

Update 8:25pm: One under at Washington Ave and Fulton with firearm recovered.

Update 8:20pm: Presently, there is a large protest group marching along Fulton Street in Brooklyn, a large group crossing into Manhattan from Brooklyn, and large groups roving lower Manhattan.