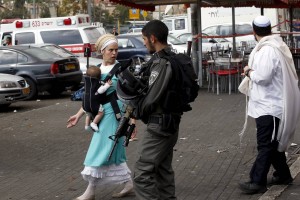 Five Jews were stabbed by two Palestinian terrorists today in Yerushalayim, but you wouldn’t know it from a Wall Street Journal headline.

An article by Asa Fitch in the Journal is titled “Attacks in Jerusalem Leave Five Wounded, Two Dead.” A reader of the headline would believe that those who were wounded and those who were dead were of the same ilk. In truth, the five who were wounded were innocent Jews, while the “two dead” were the Palestinian terrorists shot dead by Israeli police.

Only once one reaches the second paragraph does one discover that “the day’s first stabbing was carried out by a 16-year-old Arab in the morning near one of the gates to the walled Old City. Two Israelis were wounded, police said, while the attacker was killed by the police.”

Unfortunately, this kind of reporting and misleading headlines in particular, equating both sides in this battle, have become par for the course.