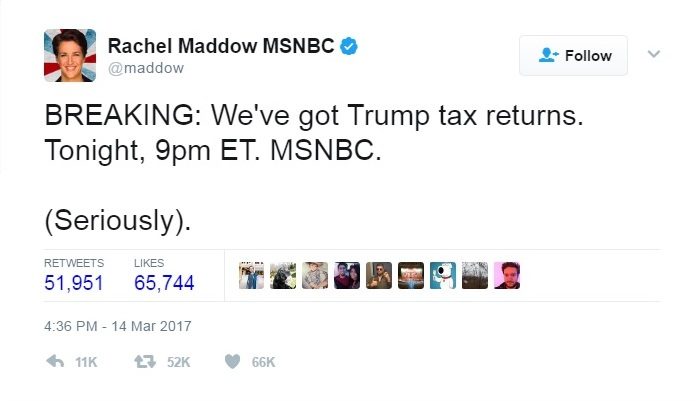 Even before Rachel Maddow unveiled President Donald Trump’s 2005 federal tax return live on MSNBC Tuesday night – which did take way too long – the White House claimed the document was being “illegally published.”

“It is totally illegal to steal and publish tax returns,” the White House added in a statement.

It is indeed illegal to steal and publish tax returns, but publishing a tax return that just arrives – unsolicited – in your mailbox is possibly protected by the First Amendment. David Cay Johnston, the journalist who obtained the document and shared it with Maddow, said on the air that that’s exactly how he got it.

Johnston even suggested that Trump could have leaked the return himself, though he said there is no specific reason to believe the president was the source.

The White House statement almost certainly refers to a federal law that prohibits unauthorized publication of a tax return or “return information.” It goes like this:

“It shall be unlawful for any person to whom any return or return information (as defined in section 6103(b)) is disclosed in a manner unauthorized by this title thereafter willfully to print or publish in any manner not provided by law any such return or return information. Any violation of this paragraph shall be a felony punishable by a fine in any amount not exceeding $5,000, or imprisonment of not more than 5 years, or both, together with the costs of prosecution.”

The law further states that the term “return information” covers not only return documents themselves but also the “amount of his income, payments, receipts, deductions, exemptions, credits, assets, liabilities, net worth, tax liability, tax withheld, deficiencies, overassessments or tax payments.”

Understanding that there could be at least some legal risk attendant to publication of Trump’s tax returns, New York Times executive editor Dean Baquet and Washington Post associate editor Bob Woodward said at Harvard in September that they would be willing to do jail time, if that were the price to pay.

After the Times published its story, the legal blog Concurring Opinions collected the views of 10 experts in First Amendment law, who concluded that the newspaper was likely on firm ground, so long as it did not participate in illegally accessing Trump’s tax documents. The same might apply to Maddow and Johnston now.